The Blitzball star that no soul in Zanarkand could fail to recognize. He was wild and exuberant in everything he did - except when expressing his love for his son. He served as one of Braska's guardians with Auron.

Jecht appears as an unlockable character, obtained by collecting Golden Crystal Shards. His design is based on his original Final Fantasy X attire.

He is an Offense and Defense oriented character. His Limit, Blitz King, deals damage in proportion to his Strength and Spirit. In addition, Braska's Final Aeon also appears as a boss-class enemy. 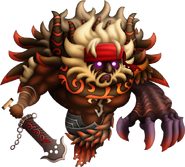