Member of the Crystalguard's Three Cavaliers

That's just how things are panning out here. But if you and I team up, I'd say we're practically unstoppable.

Janne Angard, born Janne Balestra, is a temporary player character in Bravely Second: End Layer. Nicknamed "The Blazing Wolf", he is a swordsman serving as one of the Three Cavaliers tasked to protect Agnès Oblige. He carries the Fencer asterisk.

Janne is a sixteen-year-old boy with long black hair and green eyes. He wears a long blue jacket with a white lion symbol in the center, white gold-trimmed cuffs and collar. The jacket has a golden back. He wears white pants with a black belt, brown boots and brown gloves. He wields the fencing sword Stinger.

Janne's Imperial outfit consists of a long black jacket with the Glanz Empire symbol in the center, red silver-trimmed cuffs and collar. The jacket has a red back. He wears black pants with a black belt and black boots. His hair becomes dark gray with white tips and he wears dark red/purple gloves. Denys also provides Janne with his father's fencing sword, which Janne names Vendetta to reflect his desire for revenge.

Janne is ambitious. He begrudges Yew Geneolgia and finds Yew weak and unable to defend himself. Janne pretends the friendship he established with Yew in Al-Khampis is insignificant to him. However, he seems to care for Yew and wishes Yew to fight what he believes in.

Having come from the Balestra family in Gathelatio, Janne's family opposed the Orthodoxy relinquishing Eternia to the Anticrystalists. But House Balestra, along with other houses, was wiped out when Janne's father Jerome sought to continue their righteous activities of protecting the vestals. Janne was then adopted by Jerome's squire, who raised him before he and his wife reveal his actual lineage on their deathbed. Though he promised to take the secret to his grave, Janne was filled with a desire for revenge. He took up fencing in Al-Khampis, meeting Yew Geneolgia as the two eventually joined the Crystalguard and made names for themselves as cavaliers.

After Kaiser Oblivion kidnaps the pope, Agnès Oblige, Janne and his fellow cavalier Nikolai Nikolanikov appear in Gathelatio's sanctum, telling Yew about the Crystalguard's forces being wiped out by the kaiser's attack. He was shocked when Yew decides to head to the Skyhold to rescue Agnès, and decides to join him, along with Nikolai. But once at Pilgrim's Grove, Janne reveals that he aligned himself with the Kaiser as he killed several of the Crystalguards and was about to do the same to Yew after he refused to join him.

After facing Yew's group at Eternian Central Command, Janne encounters them again in the Harena Sea Caves when he retrieves the Compass of Space and Time from a dying Minette Napkatti. Yew's group chase Janne to the Grand Mill Works in Ancheim, the fencer revealing his true heritage and reasons for joining the Glanz Empire before using an Amphisbaena to cover his escape. When the party visits the Fire Crystal, Janne appears once again to battle them and learn the kaiser's goal is to rewrite history the Compass of Space and Time. Though he appeared to have fallen to his death after the battle, Janne returns to the Skyhold and sacrifices himself to hold Yew's group at bay for the kaiser's to complete their agenda.

When Yew and his group use the SP Hourglass to go back in time to stop the kaiser before he could kidnap Agnès, it negated Janne's demise with him gaining memories of his previous timeline as consequence. While taking out some of the Crystalguard responsible for his parents' deaths, Janne and Nikolai manage to spirit the unmasked Denys Geneolgia back to the Skyhold.

In battle, Janne utilizes his skills as the bearer of the Fencer asterisk. He will start the battle by going into the Blazing Wolf stance, then uses the Wolf Fang and Goring Aurochs special moves in succession to deal damage and boost his offense and defense stats at the same time.

In later fights, Janne will also begin using Stampede to deal high-damage counters to those who physically attack him while he is in the Stalwart Aurochs stance. It is thus important to either save physical attacks for the periods he is in another stance, or to use a magic-based attack plan.

In his final battle, Janne will use the Soaring Falcon stance to boost his speed, and unleash Falcon Claw attacks for massive damage on random targets.

He is voiced by Tony Azzolino in the English version.

Janne appears as an obtainable unit. 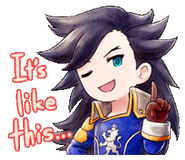 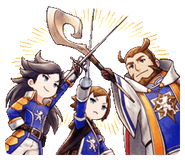 CG render in the opening movie.

Janne in the opening FMV.

Janne in the opening FMV.

Janne, Yew and Nikolai in the opening FMV.

Janne and Nikolai in the opening FMV.

"Angard", Janne's fake surname, is a play on the fencing term en garde, which is French for "on guard."

[view · edit · purge]In fencing, balestra is a type of forward step that is usually followed by a lunge.