The lady who protected me from the storm as the boat lurched about in the waves... My biological mother, who died on that boat.

Jane is the biological mother of Princess Garnet in Final Fantasy IX. Originally from Madain Sari, Jane died while trying to escape the unnatural storm that had struck the summoners' village.

Garland, the ruler of Terra, had become wary of the summoners' powers, the ability to call forth eidolons. To ensure his plan of assimilating Gaia would go smoothly, Garland attacked Madain Sari with the Invincible, killing most of the villagers. Jane escaped on a small boat, taking her daughter and fleeing the burning village, but she died on the rough seas caused by the storm. Jane was able to protect her daughter, as Sarah (Garnet) sailed safely to Alexandria to be adopted by the royal family and raised as a princess.

Garnet struggles remembering her childhood before the age of six and has forgotten Jane, though at times has flashbacks to a scene of stormy seas and a woman on a small boat with her. Once she learns the truth of her birth, Garnet laments that the Invincible took everything from her, including Jane and her adoptive mother. 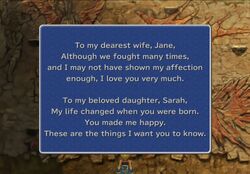 Jane's name is not revealed explicitly during gameplay and can only be discovered on the Eidolon Wall on Disc 4. The player must form a party with Garnet and visit Lani standing on Eiko's back porch. Upon arriving, Lani will run away.

The player must exit the village and return with anyone except Garnet or Amarant in the party and talk to Lani twice, read the message and go to the Eidolon Wall and walk clockwise from the entrance (heading to the right), just past the "!", until a chime is heard. Next the player has to walk counterclockwise back to the entrance, just past the "!" again, repeating this nine times, going back and forth.

Then the player has to read the murals to discover messages from Garnet's father addressing Jane and their daughter. 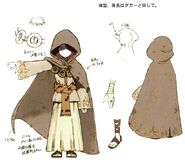