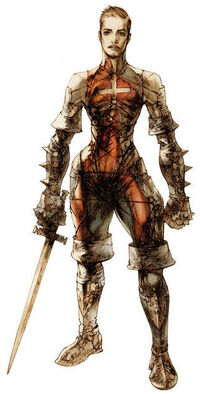 Yet you know nothing! Naught about Leá Monde, Müllenkamp, Sydney... Nothing at all!

Jan Rosencrantz (ジャン・ローゼンクランツ, Jan Rōzenkurantsu?) is a mysterious character in Vagrant Story. Though he claims to be a Riskbreaker of the Valendia Knights of the Peace, his actual employer and motives remain shrouded in secrecy of his own making.

Rosencrantz is a man seemingly in his late 20s.

Rosencrantz is well-informed of the doings in of the major forces fighting in Leá Monde, and seems to know all the key characters personally, though never on an amicable basis. To them, he is often titled "the worm". He is a man without scruples and scorns those with morals as "weak-willed". Though the wielding of a Dark-enchanted stone Kora sword by the name of Pussyfoot, Rosencrantz has immunity to the powers of the Dark, but not to its aftermaths upon death.

Rosencrantz is bitter towards the nobles who ruled the land by forcing their hands through use of ordinary folks such as him and Ashley in their pursuit for power. His anger towards all sides, not just the Parliament, the VKP but also to the Cardinal and Müllenkamp causes him to have a warped view on justice—that it was time for the "pawns to take over the gameboard from those who rule on their satin couches". He was eager to do this by pursuing control of the Dark and his connections to Müllenkamp provided him with the knowledge and path into achieving this power by manipulating all sides from the shadows.

Rosencrantz used to be a Riskbreaker as he claims. He worked with Ashley Riot and was there when Ashley murdered Tia and Marco just for seeing the actions of the VKP. Ashley is struck by grief over killing the very people he pledged to protect, and is driven incapable of being a Riskbreaker. Rosencrantz helps erase Ashley's memory and make him believe the people he killed were his family who were murdered by bandits.

Later, he is ordered to investigate Leá Monde, but is expelled from the Riskbreakers for his connections there, though he continues to bear the title. Rosencrantz moves on to manipulate both the Order of the Crimson Blades and Müllenkamp, earning distrust in both sides. His ultimate goal is to obtain the power of the Blood-sin from the Müllenkamp leader, Sydney Losstarot and his betrayals are steps on his road to power.

Rosencrantz works under the command of Duke Bardorba. He is ordered to go to Leá Monde and defeat both sides, leaving none alive in the town. However, he never again shows much loyalty to his newest employer.

Rosencrantz follows Ashley in Leá Monde during the battle between the Crimson Blades and Müllenkamp. After the work on his memory, Ashley has no idea who his former partner is. At the Snowfly Forest Rosencrantz appears to Ashley, claiming to be a Riskbreaker sent by Grand Steward LeSait to aid him during his mission. Ashley does not believe a word of this, and Rosencrantz taunts Ashley of being the most ignorant person of the affair. Angered, Ashley promises to kill Rosencrantz if he ever runs into him again. Later, Father Grissom appears following Ashley. Grissom is not happy to see Rosencrantz involved and threatens his life. Grissom presses on into the Snowfly Forest, despite Rosencrantz's warning he would not survive the trip.

In the city center, the Crimson Blade leader, Romeo Guildenstern, finds Rosencrantz appearing to him. After a difficult discussion, Rosencrantz is sent to fight Ashley Riot, who has appeared behind the group of Crimson Blades. The two fight, but Rosencrantz loses, though he refuses to admit it. Instead, Rosencrantz uses his knowledge of Riot's past to attack his mind and divulges what happened to Tia and Marco. Leaving, Rosencrantz promises to defeat Ashley the next time, though he would never get the chance.

Moving to fulfill his plan, Rosencrantz targets a lone Sydney. Rosencrantz is furious Sydney has chosen Ashley Riot, a man weakened by a moral compass, to receive the Blood-sin over him. Using his immunity to the Dark, Rosencrantz seems to defeat Sydney, and cuts off one of Losstarot's arms. Sydney shows off his limbs are mechanical, then retakes the upper hand as Ashley enters the room. Using his power over Leá Monde, Sydney brings a large statue to life. The monster swings down its huge sword, destroying Rosencrantz in a single blow, all his ambition left unfulfilled.

Rosencrantz is fought as a boss in the Keep.

Rosencrantz has three tracks relevant to his appearances in the Vagrant Story Original Soundtrack, with one particular track being his character theme. It carries the same leitmotif, ominous wind pipes and strings accompanied by percussions. "Another Riskbreaker", track 21 of disc 1 plays during his first encounter with Ashley Riot. "Rosencrantz", track 24, plays during the boss battle against him, while "The End of Rosencrantz ~ Kali", track 15 of disc 2, plays during the cutscene with Sydney and the statue Kali.

[view · edit · purge]Rosencrantz is a minor character in William Shakespeare's Hamlet whose role is expanded in Tom Stoppard's absurdist play, Rosencrantz and Guildenstern Are Dead.