Leader of the rebel army in the Zoldaad Empire. Easygoing on the surface, with an eye for women to rival even Rain's, inside beats an earnest and determined heart that bleeds for the struggles of his people. Though he uses his sly nature to manipulate Rain and his comrades at first, this only proves how resourceful he is.

Jake is one of the main characters of Final Fantasy Brave Exvius. A mercenary and the leader of the Raven rebel army, he fights for freedom in the Zoldaad Empire, wherein its inhabitants suffer under the rule of Emperor Sozhe and the sinister Dr. Lazarov.

Jake has layered greenish-blond hair tied into a short ponytail. He has green eyes and a short beard. He wears a dark grey sleeveless shirt, green cargo pants and black and yellow combat boots. He wields a pair of triangular shaped gunblades which can be attached at the hilts.

In the second season, his clothing choice is largely unchanged, although he changes his weapon to that of a massive handcannon. He has also cut his hair short and has more prominent facial hair. He is noted to look considerably older than his actual age.

Jake is both laidback and flirty, chasing after any girl he encounters regardless of age and attempting to court them. And yet, he is also a calculating, resourceful and precise individual who can actually yield great results and inspire a surprisingly charismatic and effective leadership when he is serious. These traits, along with his strong determination, make him a good leader to the Zoldaad rebels with all the members placing their full trust on him.

Jake vehemently opposes injustice and abuse of power or authority, knowing it will be the weak that will get hurt. He stands up for those who otherwise have no ability to fight back. Despite his background, Jake is surprisingly level-headed, not holding any grudges against his father for casting him aside due to his illegitimate origins, nor against his half-brother. Rather, he opposes his father out of the injustices he commits, and fully supports his brother, who genuinely believes in changing Zoldaad for the better.

Jake has a rather complex relationship with Lid. The two interact the most out of each other in the party with Jake often attempting to flirt with her, which causes her to reject him at every instance. His romantic approaches and loud-spoken fantasies even in serious situations force her to constantly keep him reined and to focus in the bigger picture. Nonetheless the two feel genuine affection for each other.

Jake also develops a friendship of sorts with Nichol. Although Nichol believes Jake to be a "perverted, lecherous and licentious" person, he is nonetheless amused with his advices, which ironically worked perfectly to convince Veritas of the Light against revenge. Jake teaches him about his 31 lady-killing techniques, believing Nichol to be a "natural-born ladykiller".

3★ - No. 0393: The leader of the rebel army opposing the Zoldaad Empire. A lighthearted man by nature, Jake is even more easily swayed by women than Rain. However, he hides a fierce resolution within to protect those who suffer from oppression. When Jake first met Rain and his comrades, he made use of his sly and cunning to manipulate them into doing his bidding. These resourceful qualities, among others, are what make him such an efficient leader.
4★ - No. 0394: The man leading the people of the rebel army fighting against the oppressive Zoldaad Empire. Jake is a well seasoned warrior who used Rain and his companions to his own ends, albeit without any malice behind his motives. Always seeking to aid the defenseless, he is rarely apologetic about the soft spot he has developed for the ladies.
5★ - No. 0395: A man who befriended Rain and his companions whilst opposing the oppressive Zoldaad Empire. Jake always defends the little people and stands by what is righteous, condemning the powerful who prey upon the weak. He never fails to defend any ladies in his presence, and treats Rain and Lasswell as if they were his own children. Occasionally, he will also impart some words of wisdom befitting his age.
Entries for different versions of Jake.

Jake is a story unit that can be obtained at Downtown Zoldaad upon completion of the Invincible Interior dungeon. His job is listed as Mercenary, and his role is that of Physical Damage. He starts at Rarity 3★, and can be awakened up to 5★. Being one of the main characters, Jake has several alternate versions, with different and usually more powerful abilities than his story variant and Trust Master rewards of their own. Many of them are time-limited, however. His current variants are: "Hunter Jake" (3-5★), available during a Japan-only collaboration with Monster Hunter Explore, and the Global-exclusive "Pirate Jake" (4-6★) and "Cowboy Jake" (4-5★).

From Season Two onwards, the 5-7★ "Nameless Gunner Jake" (無銘の銃士ジェイク, Mumei no Jūshi Jeiku?) has been available as a permanent Rare Summon. A vast improvement over his story variant, his stats are higher and his skillset was totally reworked. He is a "finisher", a unit that is meant to deal enormous damage by himself if his attacks are timed correctly to land at the end of a chain. Like the other so-called CG units, Jake's Limit Burst ("AL Type Light Particle Beam") is a special CG movie and a powerful attack.

Jake appears on a Triple Triad card in the version available via the Final Fantasy Portal App. 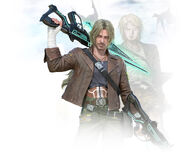 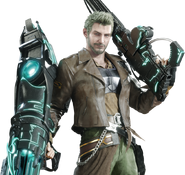 Jake in a Season Two artwork by Yoshitaka Amano. 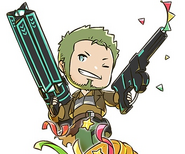 Illustration for the game's second anniversary.

First Anniversary artwork from War of the Visions featuring Jake.

Jake and the cast of Final Fantasy Brave Exvius in the Touch It music video.

Jake is dropkicked by Lid for his advice to Rain regarding the two Finas.