Final Fantasy Wiki
Register
Don't have an account?
Sign In
Advertisement
in: Characters in the Chocobo series
English 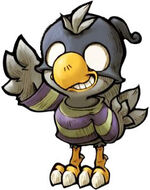 Jailbirds (チョッカーズ, Chokkāzu?) are Irma's lackeys in Final Fantasy Fables: Chocobo Tales. They do not do much other than hang around the island, although some are stupid enough to give Chocobo some hints during his adventure. One will even play with the player on the see-saw at the playground. One jailbird will even give the player a prize if they help them by making their white outfit black again.

Jailbirds also appear in the Battle Mode part of the storybooks, competing against Chocobo in a minigame. The player must beat the Jailbirds to progress in the story.

They are also playable characters in Multiplayer mode (minigames and duels).

In Final Fantasy Fables: Chocobo's Dungeon, if Chocobo examines the see-saw in the park or the tree near Stella's farm, Jailbird will appear to greet him or play with him. Afterward, Jailbird will give Chocobo two of the letters written by previous warriors of Lostime for Romantic Phrases.