Cid Pollendina: Oh, shut up and help me remodel the Jahara page!
Please expand this article into a full one. The following tasks need to be completed:

Who are you? This is garif land. No place for hume-children to play at games.

Jahara is a location in the land of Ivalice in Final Fantasy XII. It is the home to the remote tribe of the garif. It is not a technologically advanced city like Rabanastre or Bhujerba, but a land whose people live close to nature and subsist by hunting.

A garif village in Bancour. Here, a chieftain elder watches of the old ways, and so administers the tribe. Though many other villages dot the area, there is little direct communication between them. The garif have worshiped magicite since ancient times, and tribal legends tend much wisdom concerning the Stones. When the time is right, the elders teach these lesson to the youth of the village, and, on rare occasion, to visitors from other lands. Abhorring machinery and iron, much of the garif material culture is based on wood and stone and other unmanufactured things. Their houses made of grass and strips of leather allow a breeze to pass through, and are uniquely suited to the hot, arid climate. On the hill overlooking the village is a meeting lodge, warmed always by a bonfire. Near the lodge are the elders' huts, and below the hill is a clearing ringed by a healer's hut, and the tents of craftsmen, as well as a place to take care of the livestock, called "nanna" in the garif tongue. Dalmasca has for many years honored the ways of the garif, and so kept up a peaceful trade and relations with this isolated people.

Jahara is located in the Bancour region, across the banks of the Sogoht River. It is only accessible by going through the Ozmone Plain.

The original version has no treasure in Jahara. However, they do appear in the Zodiac versions.

A chest containing a Pheasant Netsuke can be found in the town. It will always appear, but does not respawn. The other chest contains generic treasures.

Since the garif shun technology, the village has not changed much over the years. Seven centuries ago, the Occuria, knowing the garif worshiped magicite, gave them some nethicite. However, even the wisest garif knew not how to use the stones, and, as such, the Occuria took the nethicite and gave it to someone more knowledgeable, King Raithwall, the Dynast King. This is one of the many stories passed down in Jahara.

During Final Fantasy XII Princess Ashe wants to fight the Empire with a piece of deifacted nethicite, the Dawn Shard. Even though she has witnessed the stone's amazing strength, by having seen it destroy Dreadnought Leviathan and the entire Archadian 8th Fleet, she has no idea how to harness the stone's power. Fran tells her that the garif down at Jahara might know, as magicite lore is part of their culture.

The party arrives at Jahara and are granted entrance as a garif warrior has seen them crossing the Ozmone Plain on foot. They talk to the Great-chief Uball-Ka, but to Ashe's disappointment the Great-chief tells her the garif don't know how to use the stones, and what worse, that the Dawn Shard has lost its power as the Mist trapped inside the stone was drained when it unleashed its power on the Leviathan, rendering it useless as a weapon.

The party is met by Larsa Solidor of the ruling family of Archades who has come looking for Ashe, as he has a plan to prevent the war looming above the nations. Ashe is reluctant to follow with Larsa's plan, and during the night she takes a walk on the village proper. She is met by a ghostly vision of her late husband, Lord Rasler. Vaan sees Ashe wandering about the village and tells her that he, too, can see the vision.

Vaan and Ashe have a chat on the village bridge. Vaan tells Ashe he is through running away from his problems, and from now on will try and actually do something and not just stand aside.

The next morning Ashe promises to accompany Larsa to Mt Bur-Omisace to meet the Gran Kiltias.

Upon arriving at Jahara, the player must talk to garif until they receive a Jaya Stick from high-chief Zayalu in Lull of the Land area. Talking to Supinelu in the west exit and choosing the first option twice allows the party to see the elder. The Jaya Stick is taken from the inventory and given to Supinelu. However, the player can sell the Jaya Stick for 500 gil and still be let through. If the player gives Jaya Stick to Supinelu they will eventually get Bowgun (original)/Recurve Crossbow (Zodiac versions) and Onion Bolts. If they sold it, they will obtain Killer Bow and Onion Arrows instead. 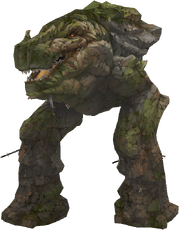 The Enkelados is the weakest Rank II Mark and becomes available after the player can access Ozmone Plain. It can be found in The Shred and can only be encountered after the player has killed all of the Wus in the area. It is petitioned by low-chief Sugumu in Jahara.

Ixtab is a Rank II Mark found in the Phase 1 - Shaft area of the Henne Mines. It becomes available to hunt after the storyline events in Eruyt Village are complete. It is petitioned by High-chief Zayalu in Jahara.

The Catoblepas is a Rank VI Mark whose hunt becomes available after the events in Giruvegan. Catoblepas can be found in the Zertinan Caverns and is petitioned by War-chief Supinelu in Jahara.

If the player returns to the village after entering the Eruyt Village the first time, the party finds Larsa's bodyguard who gives the party three Hi-Potions and an Ether. He disappears after the events in Henne Mines.

After obtaining ten Espers the player can talk to the Geomancer Yugelu in the village and he will open a new path in the Henne Mines that leads to Zodiark.

"Jahara, Land of the Garif"

The theme that plays in Jahara is called "Jahara, Land of the Garif" (ガリフの地ジャハラ, Garifu no chi Jahara?).

The map can be bought in the Banks of the Sogoht for 30 gil.

When going through the Ozmone Plain for Jahara, the player might spot a garif picking on a chocobo. This is actually Supinelu, training alone in the plain: depending on if he falls or survives by the time the party reaches the village, the player gets different dialogue from him once in Jahara.

Jahara on the world map. 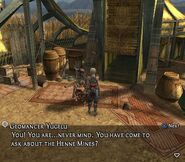