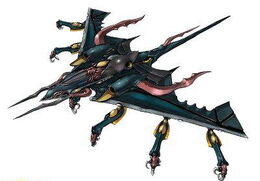 Jade Weapon (ジェイドウェポン, [missing rōmaji]?) is an enemy in the Weapon Mode of Before Crisis -Final Fantasy VII-. Chronologically the first of the planet's Weapons to be awakened from beneath the ice, the Jade Weapon possesses approximately 3,000,000 HP. Around 200 meters in length, the Weapon generates a dark mist as it moves, enabling the Player Turks to track it through a radar system.

Following Zirconiade's defeat, the Player Turks go into hiding across the planet, retiring to Midgar, Junon, Costa del Sol, Cosmo Canyon, Icicle Inn, and Wutai. Unknown to them, the planet had summoned Jade Weapon to deal with the Zirconiade threat. Because the Turks defeated Zirconiade before the Weapon's arrival, the Weapon no longer has a purpose. Instead of returning to sleep, the Weapon considers the Turks a threat due to their defeat of Zirconiade and how, technically, they had destroyed a part of the planet's ecology.

A number of weeks later, Verdot calls the Player Turks to inform them that the Weapon is hunting them.

Given an advanced radar system on their PHS to hunt the Jade Weapon, and learning that the dark mist the Weapon generates and surrounds itself with can only be penetrated by the light given from various Materia Pillars across the planet, the Turks locate the pillars so they can battle the Weapon. Coming to a location covered in mist, the Weapon is supported by various oval-like constructs which the Turks battle while the Weapon attempts to bombard them from above. After numerous hunts and battles across the planet, the Turks destroy the Jade Weapon and return to their respective lives in exile.

The location for the fight with the Jade Weapon corresponds with the player's location in Japan. For example, if the player is playing the game in Tokyo, they will find and fight the Weapon in Midgar.

Upon defeating the clusters, the Weapon will retreat to another part of the planet to do battle with another Turk. After nine battles at each location, the Jade Weapon is defeated.

When Jade Weapon defeats and captures a Turk, a the new WEAPON-D mode becomes available. Similar to RESCUE mode, WEAPON-D mode consists of the Weapon taking a Turk to another dimension where, by fighting their way through a number of enemies, including Golems and a shadow version of themselves, the Turk can rescue their captured colleague and return to the normal world. 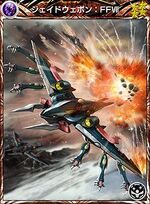 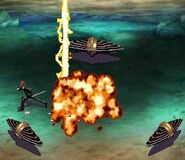 [view · edit · purge]Jade is an ornamental rock. The term jade is applied to two different metamorphic rocks that are made up of different silicate minerals. Nephrite can be found in a creamy white form (known in China as "mutton fat" jade) as well as in a variety of greens, whereas jadeite shows more colour variations, including blue, lavender-mauve, pink, and emerald-green. Of the two, jadeite is rarer. Translucent emerald-green jadeite is the most prized variety.