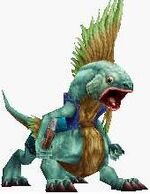 Jabberwock (ジャバウォック, Jabawokku?), also known as Jabberwocky, is a recurring enemy or enemy name in the series. Every enemy named Jabberwock has a different appearance, but they have appeared as bosses and otherwise notable enemies, like in the friendly monsters sidequest in Final Fantasy IX. The name originates from a nonsense poem by Lewis Carroll, where the creature called Jabberwock is never fully described, but is accepted to be an unworldly and vicious entity. 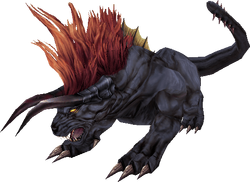 Jabberwock is an enemy fought during Missions 2-4-4 and 9-2-6. It is a very powerful foe, hitting with powerful physical attacks, utilizing the Ultima spell, and can use its Limit Break, Comet 2, upon defeat, dealing upwards to 3,000-5,000 HP to Zack.

Jabberwock is an enemy fought at Blairsupass Plains on the Forgotten Continent. It fights by alternating giving or removing Float from the party with either Light (although this does not actually deal more damage with its Aera spell) or Heavy (to attack the party with Earthquake). However, it is not a difficult foe to defeat. Jabberwocks usually appear in pairs. Using Eat on a Jabberwock will allow Quina to learn Limit Glove.

A friendly Jabberwock can be found as part of the friendly monsters sidequest at Seaways Canyon on the Forgotten Continent, and requires an Emerald to receive its rewards. 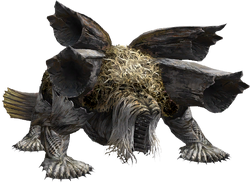 Jabberwocky is initially fought as a boss alongside Bandersnatch in Orphan's Cradle, and is later fought as a regular enemy.

The Jabberwock is a boss encountered in Costlemark Tower for the sidequest of the same name. A stronger version can be challenged afterwards in the Fiend of the Fallgrove hunt. 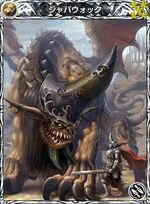 [view · edit · purge]Jabberwocky is a nonsense poem written by Lewis Carroll in his 1871 novel Through the Looking-Glass, and What Alice Found There, a sequel to Alice's Adventures in Wonderland. In an early scene in which she first encounters the chess piece characters White King and White Queen, Alice finds a book written in a seemingly unintelligible language. Realising she is travelling through an inverted world, she recognises the verse are written in mirror-writing and holds a mirror to one of the poems, and reads the reflected verse of "Jabberwocky." She finds the nonsense verse as puzzling as the odd land she has passed into, later revealed as a dreamscape. The creature called Jabberwock is never fully described but is accepted to be an unworldly and vicious entity. This poem is also responsible for the name of the Bandersnatch, another recurring enemy, as well as being the source of the adjective "vorpal", seen with the Vorpal Bunny.