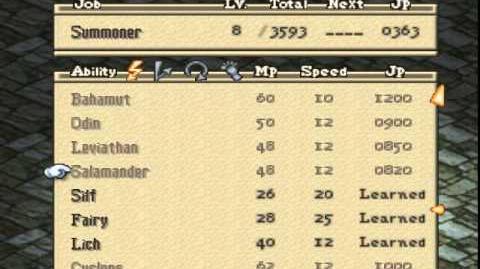 . If the ability highlighted is dark red or already owned, the player must confirm and should have 0 JP. The player should back out to the character select screen, then go back to the learn ability screen. The player now has 9,999 JP.

Certain skills will add different amounts of JP; some will subtract, and still others will show 0 JP, but allow the player to buy any skill without exiting and re-entering the ability screen. Trial and error, or a FAQ, is required in some cases.

in the ability menu works in a way similar to the "page down" on a computer. During programming the normal scrolling is disabled when an ability is selected, but the page down scrolling is overlooked. When the player goes to an ability with more JP than they have, it registers as a number less than zero. It registers this as a glitch and tries to end the defective program by entering the final value, 9,999. Because of this, one could consider this glitch to be a form of underflow.

There are certain classes that do not have more than one page of abilities so they cannot use this glitch: Archer, Bard, Calculator, Divine Knight, Dragoner, Engineer, Heaven Knight, Hell Knight, Holy Knight, Knight, Mime, Monk, Soldier, Squire (not including Ramza after Chapter 4), and Thief. The Black Mage class presents a problem, as one page from a Lv. 1 spell is another Lv. 1 spell. To avoid this, the player can put the Lv. 1 spell they can learn on the bottom of the page.