Jason Spisak
Izana Kunagiri is a supporting character from Final Fantasy Type-0. He is the elder brother of Machina Kunagiri by four years, and Rubrum legionary. He has a chocobo called Chichiri.

Izana is a dominion legionary with green eyes, short black hair, and a scar running across his left temple. According to the Rubicus, Izana is 21 years old and 175cm tall. He wears the standard maroon cloak of a dominion legionary, and his facial features are similar to those of his brother's, Machina.

Izana has a fondness for chocobos, but seems more serious in nature than he appears. He envies his younger brother, who was chosen to become an Agito Cadet, and wants to prove himself on the battlefield so Machina could be proud of him. Though the brothers' relationship is at times strained, and the two argue with Izana viewing Machina as immature, Izana values the bond they share.

Izana can be found in the Chocobo Ranch during the morning, afternoon and evening.

This section about a character in Final Fantasy Agito is empty or needs to be expanded. You can help the Final Fantasy Wiki by expanding it.

Whether it's with you or anyone else, I'll fight for the Dominion, and for my brother's future. As long as I breathe air.

Ever since he was young, the calm but energetic Izana enjoyed talking to peddlers who passed through the village about their travels. During the burning of their village, Izana had been away traveling with one of these peddlers for about a month. When he returned he found the village in ruins. He realized he had forgotten about most of the villagers, but still remembered Machina and his childhood friend, Rem, knowing the two were still alive, as the Crystals of Orience erase the memories of the dead from the living.

When Izana met up with Machina again his heart had been closed off. It took Izana six years to reclaim their relationship, and during that time, Machina became an Agito Cadet. Izana also aspired to become one, but would not qualify. Joining the army instead, he took on a more active role and promised that the disaster that befell his village would never happen again. Although he worked hard, he didn't see the connection between his actions and the results of the war.

One month prior to the attack on Rubrum, Izana and his friend, Karan, hunted coeurls as part of their patrol. While at the Chocobo Ranch carrying out his duties, he met Ace who bore the mantle of an Agito Cadet. Izana had wanted to see Machina instead, but saw how fond of Ace was of chocobos and befriended him, telling his brother also liked chocobos and had named his as well. The two talked about brotherhood, Izana telling Ace he had envied Machina becoming an Agito Cadet despite being the more immature of the two, but how their blood relation had kept them close and he had come to value his brother.

The two met again later after Izana had had an argument with Machina. He hoped for a chance to prove himself so his brother could be proud of him as well. Ace's first mission was coming up and he asked permission to request for Izana's aid during it. Izana was skeptical as only the best work with Agito Cadets and he was but a regular legionary not keen on receiving Ace's charity. Ace assured it was not charity, but because it was to be his first mission, he would prefer working with someone familiar.

Upon the Militesi Empire's invasion of Rubrum, Izana is tasked with delivering the COMM device to Class Zero when the class is deployed to liberate Akademeia. Akademeia's archsorceress and Class Zero's "Mother", Arecia Al-Rashia, deploys Izana because Ace had requested him personally. Izana enters the battlefield with his chocobo, Chichiri, but is wounded due to the empire deploying the crystal jammer, cutting the legionaries from the Vermilion Bird Crystal and rendering them unable to use magic. Walking the streets, searching Class Zero in the chaos, Izana asks his allies if they have seen a young man with a red mantle, referring to Ace. They are ambushed by a bomb from a scouting patrol of Militesi soldiers, and being the only survivor, Chichiri comes to Izana's rescue. He rides her in search of Ace but being wounded and exhausted, falls off and is knocked unconscious as they make way to the Akademeia grounds.

He awakes to the sound of a gunshot, and sees Chichiri being gunned down. Despite the approach of enemy soldiers, Izana tries to use his magic to heal her, but magic is disabled by the imperials' crystal jammer. In desperation and before overwhelming forces, Izana yells out Ace's name, who arrives and kills the soldiers. Ace tries to help Izana, but Queen says it is too late to save him. Ace and Queen reluctantly leave him to join Nine in fighting off a second platoon of Militesi soldiers.

Izana lies with Chichiri, commenting her name being weird. On the verge of death, he wonders if Machina is well and thinks of Rem, wanting to see her again. Izana spends his final moments breaking down as he fears death. After Izana and Chichiri die, Ace approaches their bodies and sheds a tear for them.

Though Ace tries to act ignorant of his involvement, Machina eventually learns of the event and develops a grudge against Ace and Class Zero for changing Izana's mission orders to the ones that got him killed.

In the alternate ending, Arecia's removal of the four Crystals from Orience negates both the Militesi invasion of Rubrum and Izana's death, and Izana is dating instructor Emina Hanaharu.

In the English version, Izana is voiced by Jason Spisak, who also voiced Bartz from Dissidia Final Fantasy and Dissidia 012 Final Fantasy.

Izana in the Type-0 manga. 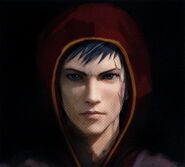