Ixtab is an enemy in Final Fantasy XII and a Rank II Mark found in the Phase 1 Shaft area of the Henne Mines. It becomes available to hunt after the storyline events in Eruyt Village are complete, after opening the path through the Golmore Jungle.
See also: Ixtab

Hunt 12: The Dead Ought Sleep Forever[]

Our tale begins in Incident: the Slaying in cold Blood of many garif - a People as a Rule content to live and perish in Nature's Embrace - by Imperials for their Opposition to an Imperial Magicite mining Operation. The fierce hatred of the slain garif towards their Slayers gave rise to this monstrous Spirit. Having long forgotten its Purpose, it now attacks all Men it finds. Unable to strike at their own Ancestors, the garif posted a bill for this mark in hopes that a Hunter would aid them.

The Original Japanese Guidebook cites Ixtab's MP as being 1688, but subsequent guides list it as 999.

Ixtab will use physical attacks, may summon undead to aid it, and also inflicts Doom and other status ailments.

A simple strategy is to summon an Esper who will be immune to Ixtab's status attacks. Ixtab is vulnerable to status attacks itself, and can be rendered harmless with the Nihopalaoa + Remedy trick.

Since Ixtab spawns without pending special conditions unlike other hunts, it can be a good idea to use the Nihopalaoa + Chronos Tear trick to continually zone in and out stealing to stock up on Flame Shields. 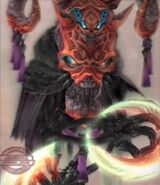 [view · edit · purge]Ixtab was the Mayan goddess of the gallows, and protector of those who committed suicide. She is depicted as hanging from a tree with a noose around her neck, and partly decomposed.