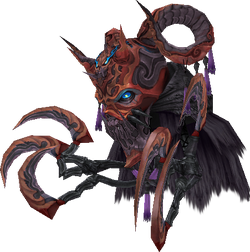 Ixtab (イシュタム, Ishutamu?) is a recurring enemy in the series. It is usually some sort of incorporeal Undead that is specially hunted by adventurers.

Ixtab is a ghost family Notorious Monster found in Upper Delkfutt's Tower on the eleventh or twelfth floors as a lottery spawn from Phasma (another ghost family monster) found in the area. It drops a high level clothcraft material, the Cheviot Cloth, as its only important item drop. It is not even the only source of this material either, as another ghost NM, Baobhan Sith in Gustav Tunnel, also drops this item.

Ixtab is a Rank II Mark of the reaper genus fought at Henne Mines (Phase 1 Shaft) after the storyline events in Eruyt Village. It is a moderately powerful foe, attacking with various elemental spells such as Dark, Aero, and Watera, reducing MP with Annul, and inflicting Stop with its regular attack as well as Doom via the Doom spell. In addition, it can summon undead enemies to aid it. It has the valuable Flame Shield as its rarest steal, earlier than when it would be widely available.

Ixtab is a boss found on floor 40 of the Palace of the Dead. It is the first wraith enemy encountered in the game. It will attack the party with various area of effect abilities such as Ancient Eruption, Entropic Flame, and Cursed Pox, and summon a pair of Nightmare Bhoots to assist it. Its most dangerous technique is a powerful Shadow Flare, which encompasses the entire arena. In addition, it will precede Shadow Flare with Scream, which will freeze the entire party in terror until shortly after Shadow Flare is cast, preventing them from using any defensive abilities or healing spells to mitigate Shadow Flare.

Ixtab is also a rank S elite Mark (not a wraith) hunted in the Rak'tika Greatwood. About her, it is said that

The Viis are not the only ones who have safeguarded the ruins of Ronka for generations. Ancient records tell of an exalted priestess of the empire named Ixtab, a penitent woman and proud patriot. So strong was her faith that she resolved to make the ultimate sacrifice. She consigned her mortal flesh to flame, and in death rose anew, her soul eternally bound to the Greatwood. For thousands upon thousands of years has she watched over these lands. Should one intrude upon her home and by their deeds prove themselves a significant threat to peace and tranquility, she will appear to redress the balance.

Ixtab is an enemy fought at World of Anguish and World of Nil. It battles using various status abilities such as Slow and Curse Breath, as well as the Gravity spell. When defeated, it has a rare chance of dropping the Daybreak Robe.

[view · edit · purge]Ixtab was the Mayan goddess of the gallows, and protector of those who committed suicide. She is depicted as hanging from a tree with a noose around her neck, and partly decomposed.