Ixion (イクシオン, Ikushion?) [ixiːon]*(Dissidia 012 pronunciation.) is a lightning-elemental unicorn from the Final Fantasy series. Replacing Ramuh as Spira's lightning summon, it appeared for the first time in Final Fantasy X.

Ixion is the Lightning-elemental aeon obtained at the Djose Temple. Ixion's special move is Aerospark, where Ixion will fire two discs that collide with a single enemy, causing non-elemental damage that negates many effects. Ixion's Overdrive is Thor's Hammer, where he charges electrical energy on the tip of the horn and shoots it toward the enemy, lifting it into the air. While still connected by an electrical current, Ixion sends a blast of electricity to the enemy, causing lightning damage.

Ixion is also fought as a boss, and Dark Ixion can be fought in the PAL, International and HD releases.

Ixion is a boss under Shuyin's control. He is fought in the Djose Temple and according to the Al Bhed, merged with their machina. Because of this Ixion is the only aeon to have altered model due to having machina components junctioned to it.

Dark Ixion appears as a Notorious Monster. It belongs to the Monoceros race.

Ixion appears as an Elite Mark. It is a very strong Nightmare monster fought at Subterra in the Pharos.

Ixion is the rank 2 Lightning Physical summon. His only attack is Hoof Kick.

Ixion is a boss and the sole enemy in the special FATE in the Lochs area. It was modeled after the Final Fantasy X aeon. It can be obtained as a mount after obtaining 12 Ixion horns, while the minion can be obtained for 5.

Ixion reappears in Eden's Verse: Fulmination. Due to the Warrior of Darkness's mind wandering to other Lightning-aspected beings during the summoning of Ramuh, the primal created is a fusion of both Ramuh and Ixion in a centaur-like form. This version of Ramuh can also summon spectral copies of Ixion known as Wills of Ixion. The Ramuh/Ixion hybrid is obtainable as a mount from Eden's Verse: Refulgence (Savage).

Although Ixion does not physically appear himself, Ramuh's staff resembles Ixion from Final Fantasy X. 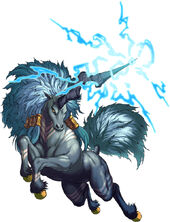 Ixion is a wind-elemental Eidolon from Final Fantasy Dimensions II. It can be obtained as a signet for Jornee to equip by doing the "Byakko of the West" side quest in the Middle Ages. The summon teaches the Thundara abilities to Jornee. 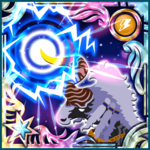 Ixion makes an appearance, summoned via Soil, the colored "bullets" of a Magun. The Soil Charge Triad needed to summon Ixion is:

Followed by saying: "Howl! I summon you! Ixion!"

In "Moogle: Nostalgic Memories", Kaze summoned forth a "zero style" version of Ixion with the aid of Moogle Kupo. As with all such upgraded summons, the Soil Charge remained the same.