In the 3D remake, Scholars have an innate ability that makes any item used by them twice as effective (E.g. a Hi-Potion used by a Scholar will heal for 1,000 HP instead of the normal 500). This ability only works in battle.

Item Lore is an Augment ability in the 3D versions. It can be obtained in Kaipo after healing Rosa.

The Chemist's ability Pharmacology doubles the effects of Potions and Ethers in battle. It is the first ability learned from the class, requiring 15 AP to master.

Smart Consumer is an Independent Materia that doubles the effectiveness of healing items at level 1, then increases by 0.5 each level, to a maximum of x4.5 at Master. It can be made with Materia Fusion by combining the Steal Materia with various other Materia, and can be found in a treasure chest during the mission 6-5-2, and received as reward for completing the mission 8-6-5. It can also be rarely stolen from Very Hungry.

Med Data is a support ability that doubles the potency of healing items. It is learned from the GF Alexander for 200 AP, and can be taught to any GF by the item Doc's Code. Doc's Code can be refined from Elixir with Eden's GF Abl-RF or Leviathan's card with Quezacotl's Card Mod.

The support ability Chemist doubles the effect of Potion, Hi-Potion, and Ether. It may be learned from the Cotton Robe, Barette, Madain's Ring, or Grand Armor. Freya, Steiner, and Dagger can learn it and it takes four Magic Stones to equip. It is learned by Freya for 35 AP, Steiner for 20 AP, and Dagger for 15 AP.

The ability may be bugged when coupled with the Auto-Potion in the PC and Xbox versions of Final Fantasy IX Remastered, the items healing for excess amounts (the amount shown on screen capped to 9999), eventually overflowing to negative values.

Alchemy doubles the effect of healing items. It can be customized onto weapons by using Healing Water x4.

The Chemist ability doubles the effect of healing items, and is learned by the Alchemist job. Alchemists can also learn the abilities Elementalist and Physicist, which double the potency of elemental and non-elemental items, respectively.

The Pheasant Netsuke accessory doubles the potency of healing items and fangs.

The Doctor's Code accessory gives the passive ability Improved Potions, doubling the effectiveness of Potions. There are only three Doctor's Codes and they cannot be purchased in shops. When maxed out, the accessory dismantles into an Elixir.

The accessory Healer's Lore gives the passive ability Item Efficacy +25% that increases the effects of recovery items by 25%. Healer's Lore is found in Moogle Village in the Jagd Woods of the Wildlands, but Lightning requires the Angel of Valhalla to be able to glide to reach it.

Item Lore is learnable by Rangers and Alchemists for 150 AP through the Wizard's Hat.

The passive ability of the Wayfarer crown doubles the potency of healing items (like potions) that the Wayfarer uses.

Alchemy is the level 18 ability of the Ranger class, learned for 550 AP. It requires one slot to equip and use, and allows the user to use two items in a row.

Item Lore is a special ability learned by Cid at Level 20 and Shantotto at Level 70. It costs 14 CP to equip and doubles the effects of healing items.

Itemagnifier is the standard ability of the Alchemist job, which adds potency to healing and buffing items used by the Alchemist.

Pharmacology is a passive ability that improves the effectiveness of HP recovery items. It can be used by 2P Serafie, Astraea, Imp, Kupirate, Master Tonberry★, Memecoleous, Red Bonnotberry, Red Captain, Serafie, and Tonberry. 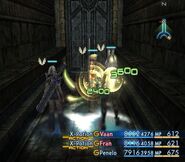 X-Potion healing different amounts of health depending on how many Item Lores the user has in Final Fantasy XII.

The ability has also been known as Chemist. [view · edit · purge]A chemist is a scientist trained in the study of chemistry. Chemists study the composition of matter and its properties. The Japanese term kusuri-shi is literally "drug practitioner/technician", close to the common British English use of "chemist" to mean a compounding pharmacist.

[view · edit · purge]Lore refers to a body of traditions and knowledge on a subject or held by a particular group, typically passed from person to person by word of mouth.

In the French translation of Final Fantasy VIII, the ability was known as Schweitzer, named after a French philosopher who opened a famous hospital in French-colonial Africa. It can also be taken to be German for "Swiss man," likely referring to the Red Cross.