Akihiko Yoshida
Isilud Tengille, also known as Izlude Tingel, is a character from Final Fantasy Tactics. He is the son of Folmarv Tengille, the leader of the Knights Templar of the Church of Glabados, and is a Knight Templar himself. He has one sibling, his older sister named Meliadoul.

Isilud has short light brown hair with a fringe on each side and brown eyes. He wears a golden templar armor with a long different shades of green hooded cloak with a white belt, matching golden pants and golden boots.

Like his older sister, Meliadoul, Isilud is unaware of the Lucavi plot and is loyal to the Knights Templar and believes in their cause. When his father Folmarv transforms, Isilud, who had been loyally following his father and the Church of Glabados's guidance, realizes the truth.

Isilud joined the Knights Templar with his father, and was entrusted with the Pisces Zodiac Stone, a legendary holy artefact of the Zodiac Braves said to have magickal powers. As Ramza Beoulve, a nobleman who has renounced his family to fight to unveil the corruption and injustice present Ivalice, becomes a problem, Folmarv sends Isilud with another new Knight Templar, Wiegraf Folles, to retrieve the Virgo stone from the Orbonne Monastery. When they arrive the librarian Simon Penn-Lachish refuses to cooperate. Isilud mortally wounds him and leaves Wiegraf to guard the entrance as he descends into the Underground Book Storage to find the Virgo stone.

Ramza arrives with his sister Alma to also claim the Virgo stone. Upon finding Simon dying, they realize the Knights Templar are already there and Ramza pursues Isilud into the basement, leaving Alma at the entrance. Isilud finds the Virgo stone, but is defeated by Ramza, forcing him to teleport back to the entrance where Wiegraf has captured Alma. Wiegraf hands Alma over to Isilud so that Wiegraf could fight Ramza. Ramza defeats Wiegraf, but Isilud takes off on a chocobo carrying Alma.

Isilud does not get far before Marach Galthena, a Netherseer working for Grand Duke Barrington, captures him. Isilud and Alma are taken to Riovanes Castle and thrown in the dungeon. When Folmarv arrives for a meeting with the Grand Duke, Marach brings Isilud before his father. Isilud apologizes, but it is a useless gesture, as he has failed his angry father, and Folmarv slaps him across the face. Marach leaves to deal with Ramza. Negotiations with Barrington go sour and Folmarv sends Wiegraf to also deal with Ramza. Folmarv begins to act provocative and Isilud wonders if something is wrong with his father.

Barrington calls his guards and Folmarv uses the Leo that glows as he transforms into Hashmal, a Lucavi demon. Isilud watches in horror as Hashmal slaughters the Riovanes Knights as Barrington flees. Isilud tries to stop his father turned Lucavi, but Hashmal crushes his skull against a wall before departing to deal with the rest of the Riovanes Knights. Alma, escaping from the dungeon, searches the castle for her brother, and finds Isilud and tries to help him, to no great success.

Isilud rambles about his inability to see or continue to fight, but nonetheless asks for his sword. When Alma tells him to hold on, Isilud hands her the Pisces stone and asks her to pass on his forgiveness to Ramza after realizing that he was telling the truth. Before dying, Isilud thinks that Ramza killed his father, as Alma states she saw the corpse of a monster in the corridors (Belias's). He says that he can rest in peace and dies. Folmarv arrives and, upon hearing the death knell of Belias—the Lucavi possessing Wiegraf—and witnessing the Virgo stone's reaction to Alma, kidnaps her. Ramza later claims the Pisces stone, which Alma dropped.

Isilud's older sister, Meliadoul, tries to avenge his death, but mistakenly believes Ramza to be the culprit for him having been branded a heretic by the church. After Meliadoul discovers Marquis Elmdore's transformation into Zalera, she apologizes for not listening to the truth. Ramza accepts her apology and the two decide to avenge Isilud together. When Meliadoul confronts their father, Folmarv, in Mullonde Cathedral, she asks if he was the one who killed Isilud in Riovanes, and learns the truth of the Lucavi which Folmarv confirms.

Isilud is fought as a boss at Orbonne Monastery. He is level 26 and has 73 Bravery, 62 Faith, and comes equipped with the Platinum Sword, Golden Shield, Platinum Helm, Platinum Armor, and Power Gauntlet. He comes with the Arts of War and Jump commands, as well as the Counter, Safeguard, and Ignore Elevation abilities. He also comes with Concentration due to his Nightblade class. He is innately immune to all negative statuses except Blind, Silence, Oil, and Slow.

Isilud and Meliadoul are the only Knights Templar to be fought once.

Isilud can be fought in the War of the Lions remake in the tenth Rendezvous battle: The Knights Templar. Here, he is 5 levels higher than the highest level unit deployed, and has 73 Bravery and 63 Faith. He comes equipped with the Defender, while his other equipment is randomized. His abilities include Arts of War and other random abilities, and he is immune to same statuses as before.

When fought in the fourteenth Rendezvous battle: Brave Story, he is level 99 and starts with 97 Bravery and 63 Faith. He comes equipped with the Excalibur, Crystal Shield, Luminous Robe, and his other equipment is randomized. He has access to the Arts of War command, as well as the abilities Counter, Attack Boost, Ignore Elevation, and another random ability. He is immune to the same statuses as before.

Isilud's spirit makes a cameo appearance in a cutscene at the end of the Return to Ivalice storyline, despite not being part of the main cast of the original game. His outfit is similar to his sister Meliadoul's, who in turn is oddly absent from the scene. 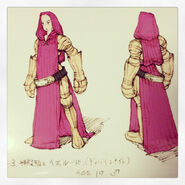 A rough sketch of Isilud as a Divine Knight. 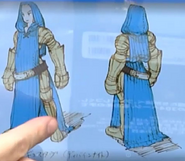