Due to his work on Final Fantasy XII, he was part of the Ivalice Alliance franchise and thanks to Final Fatasy XIII was also involved in the Fabula Nova Crystallis franchise. Kamikokuryo has been influenced by the works of various photographers, and has taken trips to New York City to observe architecture, visited the Grand Canyon for its scenery, and ventured to Italy to view ancient ruins. Kamikokuryo says there is no "Final Fantasy look," as each installment is a different world.[2] Kamikokuryo believes past Final Fantasy games had limitations in expression due to the hardware, so the development staff had to let the player use their imagination for the character costumes.[2]

Kamikokuryo has stated he believes they need to pursue something "not too realistic"; they want to keep the uniqueness of the character designs by Tetsuya Nomura, but also want to draw upon real-life inspirations. Stylization is important to Kamikokuryo, through which he wants to emphasize coolness and cuteness, and he has stated the development team is constantly struggling between realism and a more stylized look.[3] Kamikokuryo has helped shape most of the recent Final Fantasy games, and his presence in future titles will be missed, but we wish him all the best in his freelance endeavors.

Kamikokuryo notes the CGI and in-game development teams are separate, but also work together. He believes photo-realism is fundamentally an attractive proposition and will be valuable in Final Fantasy.[2]

Kamikokuryo spent nearly a year of pre-production solely on art for Final Fantasy XIII. He says he took the game's futurist framework, but incorporated elements of fantasy into it. The idea for Lightning to have a sword that can transform into a gun relates to the game's Eidolons; one of the gameplay themes chosen for Final Fantasy XIII was transformation, and the Eidolons can turn into vehicles; if summons could transform, they thought weapons should be able to as well.[5] 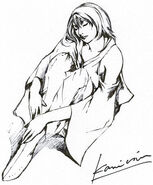 Artwork of Skycity of Bhujerba from Final Fantasy XII.

Artwork of Imperial City of Archades from Final Fantasy XII.

Artwork of Lightning in Eden from Final Fantasy XIII.

Artwork of the skies of Cocoon in Final Fantasy XIII.

"The City of Lights" promotional oil painting for Lightning Returns.