An expert sniper who took part in the plot to assassinate Edea. Irvine is a consummate ladies' man who acts as though he doesn't have a care in the world, but it's nothing more than show.

Irvine is a playable character in Final Fantasy Record Keeper He is unlocked in the Fisherman's Horizon on Classic in the storyline of Final Fantasy VIII as the First Time Reward. Alternatively, Irvine was available at early points in the Balamb Garden - The SeeDs of Conflict and To Slay a Sorceress Challenge Events, appearing in the latter event's reissue. He returned in A Meeting Beyond Time as a supporting character.

He is one of many characters who don't look like they are worth much by the numbers, but who will make his presence known if given a proper weapon and well-honed support skills. Although he has generally average stats save for low Defense, no other in his delegation can use the skills needed to break powerful foes. Getting the gun he needs, however, is potentially a frustrating affair.

His initial Soul Break is Normal Ammo, which at the expense of one Soul Gauge segment fires successive shot attacks against a single target.

Irvine can equip the following weapon types: daggers and guns.

He can equip the follow armor types: hats, light armor, and bracers. 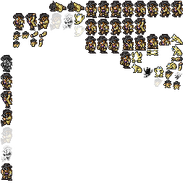