Guns and Women, of course.

Irvine Kinneas, on what his "department" is

Irvine Kinneas is a playable character in Final Fantasy VIII. An expert gunman known as the "best shooter in Garden", he is a consummate ladies' man whose reputation for cherishing the company of women is almost as well known as his accuracy with the gun. He is the last permanent member to join.

Irvine wears his long brown hair in a ponytail and has blue eyes. He has a black cowboy hat, a purple vest, a long khaki-colored jacket, black fingerless gloves and brown chaps over black trousers with black boots. He wears gray earrings and a red and yellow beaded necklace.

An expert marksman. Can use specialized bullets to attack enemies. Doesn't perform very well under pressure.

Irvine is a ladies' man who uses his loner sharpshooter persona to try to impress them. Irvine focuses his charms on Selphie Tilmitt, even helping her realize her dream of performing on-stage with a band to catch her attention. In Galbadia Garden Irvine is known for being the best marksman, to the point he's appointed as the SeeD's sharpshooter during an assassination mission. Despite his playful and suave persona, Irvine is not shallow; he has a sharp mind and cares deeply for the group's members.

During the time the player takes control of Irvine at Fishermans Horizon, he's questioned by one of the locals as to why he keeps company with "warmongers". Irvine retorts he doesn't enjoy being a lone sniper, that he's felt alone all of his life in his battles against pressure, that he considers the team his saviors from loneliness and calls them comrades. This provides a rare insight on Irvine's views about life and friends.

Although sometimes Irvine shows to be more cautious than his comrades, he is not a coward, shown when he provides a distraction at the Desert Prison to help his friends escape, and during the Battle of the Gardens. During the sequence at Trabia Garden Irvine extrapolates on his reasons for continuing the war against the sorceress, and says he will go on fighting to honor the choices he has made.

Irvine is an orphan of the Sorceress War, and lived in a seaside orphanage in Centra. He was among many children—including Squall, Quistis, Zell, Seifer, and Selphie—who were under the care of Edea Kramer, a sorceress. The circumstances of his adoption are unknown, but Irvine ends up studying in Galbadia Garden and graduates as a sharpshooter, an expert on firearms.

When Squall Leonhart's Balamb Garden SeeD team is hired by Galbadia Garden to assassinate Sorceress Edea—who by then had become a Galbadian ambassador under President Vinzer Deling—during a public celebration, Irvine is assigned as the group's sniper. As the group departs for Deling City, Irvine wastes no time on hitting on the girls on the team, Quistis, Rinoa, and Selphie.

Meeting and receiving their orders from General Caraway of the Galbadian Army, Irvine is teamed with Squall as the point assassination team while the other SeeDs are assigned to trap the sorceress. As the ceremony begins, Edea kills the president and claims Galbadia as her own. Rushing to their positions, saving Rinoa from Iguions along the way, Irvine and Squall wait as Edea is trapped under the gateway. Talking a good look at his target through the sniper rifle's telescopic lens and realizing Edea's true identity, Irvine chokes. After encouragement from Squall, who does not remember who Edea used to be, Irvine fires at the sorceress, his bullet being repelled by Edea's magical barrier.

Squall attacks her head on, and Rinoa and Irvine join him shortly after with Irvine claiming he has to redeem himself. Squall is knocked unconscious and the team is captured and imprisoned. Irvine either escapes or is, due to the Galbadian affiliation of his Garden, allowed to go free. Either way he receives orders from General Caraway to pick up his daughter, Rinoa, from the prison, and she is released due to the General's efforts. When Irvine tries to return Rinoa she forces him to assist in the rest of the team's escape.

Irvine and Rinoa break into the prison where they find the others under a hail of fire. Irvine tells the others how to get out and stays behind to buy his friends time, engaging in a gunfight with the soldiers. Shortly after the escape they learn that in retaliation for the attack on Sorceress Edea, Galbadia had targeted Balamb and Trabia Gardens for missile attack. Splitting into two groups, Squall's group and Selphie's group, the escapees save Balamb Garden from destruction before reuniting in Fishermans Horizon.

With no immediate mission to perform Irvine returns to what he does best: being a "player". He consoles Selphie, who is upset over her failure to save Trabia Garden, by asking Squall to have Fishermans Horizon's mechanics restore the Garden Festival pavilion, which Selphie had been working on since before becoming a SeeD, but it had been damaged in the Garden's escape from the missiles. Taking charge of the festival arrangements Irvine gets rest of the team involved by promoting it as an occasion to celebrate Squall's promotion to "commander" and to help bring Squall and Rinoa closer together.

During the preparations Irvine explores Fishermans Horizon, tangling with a Galbadian soldier who was left behind from a previous raid on the town. He notes that during his wanderings the town is spartan and a warning bulletin has been issued on a suspicious man in a brown coat carrying a gun. Even after reading the article Irvine still does not realize the bulletin is about him. The festival is a success with Squall and Rinoa getting some time alone to talk and, presumably, Irvine winning points with Selphie.

When the party arrives at Trabia Garden Irvine leads the party to remember their past in Edea's house. He reminds them of their history together, makes them realize the powers of the Guardian Forces come with the price of memory loss, and reveals their beloved Matron and Sorceress Edea are the same person. It is suggested Irvine did not have a nervous breakdown during the assassination plan, but recognized his Matron and hesitated killing her. Irvine wants to stay true to the path he has chosen in life, and believes they should fight the sorceress even knowing who she is. The group resolves to fight their former Matron, and head to the Centra continent to search for clues.

Galbadia Garden, now under Edea's control, is waiting for them. Irvine heads the invasion to the Garden and the group defeats Sorceress Edea. It turns out she had been possessed the entire time by a sorceress from the future, Ultimecia, and Rinoa falls into a coma. Irvine, Edea, and the rest of the party follow Squall who takes Rinoa to Esthar to look for Ellone, his "Sis" from the orphanage who he thinks could help him cure Rinoa. In Esthar Squall and Rinoa are sent to the Lunar Base to meet Ellone, where Rinoa comes out of her coma, and it is revealed Rinoa has inherited Edea's sorceress power. After Squall and Rinoa return from space they bring the starship Ragnarok, with Irvine admiring Selphie's piloting skills when she takes the reins. The group returns to Esthar by request of Laguna, the president of Esthar, who has a plan to stop Ultimecia once and for all.

Using the Ragnarok they invade the Lunatic Pandora and fight past Sorceress Adel, who had been brought down from the moon's orbit in her spacebound tomb by the recent Lunar Cry incident, and whom Ultimecia was trying to make for her new host. Ellone uses her special powers of sending a person's consciousness back in time to allow Ultimecia to start a time compression, and the party falls through time and enters Ultimecia Castle in the future. Upon Ultimecia's demise the group is trapped outside of the normal timeline, but due to their faith and trust in one another they return home safely. In a celebratory ball in Balamb Garden Irvine returns to what he loves most: wooing the girls.

Irvine wields a shotgun in battle, and his Limit Break is Shot. Shot allows him to choose from a variety of shot and ammo types, and deal damage based on how many presses of

to fire at an enemy were performed within the allotted time, which is allocated based on his Crisis Level. Irvine's ultimate weapon is Exeter, and is the only ultimate weapon that cannot be obtained before disc 3.

While choosing the performers for the Garden Festival Irvine can wander around Fishermans Horizon and Balamb Garden; in the former he can be mistaken for an assassin, become a store hero and become involved with Familiar Face #3 in a philosophical debate. Aboard the Garden he has the option of hitting on all female students and visiting a sleeping Squall in his dorm room.

Irvine has made appearances in the following games in the Final Fantasy series:

Tetsuya Nomura wanted to strike a balance with Irvine to not overshadow Squall and not be too attractive, and so gave Irvine a handsome appearance, but with a casual personality. Keeping with this idea, Nomura gave him goggles, but this idea was abandoned in favor of a cowboy-like appearance to set him apart from other goggle-wearing characters in the Final Fantasy series.[4] In the early design his hair was tied in a braid and his bangs were longer and straight.

Irvine, along with Zell Dincht, has his birthday on a holiday. While it is not a consistent holiday (being the 4th Thursday of November in the US), Irvine's birthday is a common date on which Thanksgiving falls. According to each main character's date of birth, Irvine is the youngest of the "orphanage gang".

Irvine has a Triple Triad card in the physical version of the game, released by Bandai in 1999, as well as in various other Japan-exclusive collectable card series. Irvine and Zell appear on the Guardian Force Diablos in a collectible resin statue made by KOTOBUKIYA. Irvine also has an "Extra Soldier" action figure released by Bandai during the time of Final Fantasy VIII, and a different action figure and a key chain that were once available from Japanese crane catcher games. Irvine has also appeared in Coca-Cola bottle cap figures with different styles: proportional and deformed, colored and "crystal". 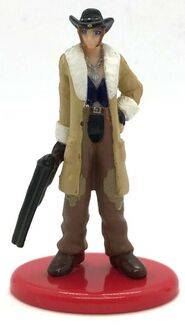 Coca-Cola bottle cap figure.
Add a photo to this gallery

Irvine with his shotgun, the Valiant.

Irvine with a sniper rifle.

Irvine's idea of a "well-formed" party.

Irvine in an FMV.

Irvine's ready pose.
Add a photo to this gallery

Clan Irvine is a clan from the Scottish Lowlands.

Kinneas is probably a variation of Cineas, from Ancient Greek Κινέας, Kinéas.