The Iron Giant is a hidden superboss in the 3D remakes of Final Fantasy III. It is hidden in the new dungeon under the sea. To battle it, the player must receive via Mognet all the letters from the Fellows and King Alus. For the mobile, PSP and PC versions, it is required to receive all the letters without the Mognet. It is the most powerful boss in the game. For defeating the Iron Giant, the player receives the Metal Card key item as proof of their victory.

Iron Giant's attacks cause various status ailments. It has 199,999 HP, has high Defense and it attacks four times per turn.

For the first half of the battle, Iron Giant will use normal attacks and cast Meteor, but once 65% of his HP has been depleted, he will switch over to using Swipe, which hits all party members for around 4,000 HP each, instead of casting Meteor.

Casting Protect is useful, although using the Defender is easier. Hasting all fighters is also a good idea. Having Ribbons or any Onion armor equipped comes in handy too, since his attacks may cause various status ailments. Casting offensive magic and summoning may also help, since Iron Giant's Magic Defense is not so high. Another good tip is to use the Onion Knight, if the party is already at level 93 and up, since their stats drastically raise after this, and they can use the most powerful weapons and armor and every magic in the game. At level 99, they will take 0 damage from Meteor. Another popular strategy is to have all characters equipped with two shields in the back row, all casting their most powerful magic. Assuming the party is made up of Onion Knights, flare will do the most damage, though it can be cast only four times without replenishing MP; Bio is effective at this point. 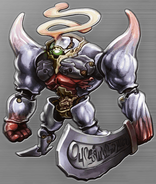 Artwork used on the Metal Card.

This section about an enemy in Final Fantasy Record Keeper is empty or needs to be expanded. You can help the Final Fantasy Wiki by expanding it.
Deutsch
Community content is available under CC-BY-SA unless otherwise noted.
Advertisement