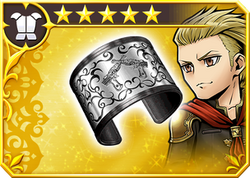 Duke's Gauntlets is an accessory that increases defense by 20 and resistance to all damage by 25%. It can be found randomly in a chest in the back of Bethnel Caverns. The chest can only be opened once per playthrough, so it is recommended to reload until the Duke's Gauntlets appear. It can be obtained as early as Chapter 5 by running to the back of the cave, looting the chest in battle, and using a teleport stone to escape.