Iroha is a Hume with long brown hair tied in a low ponytail and brown eyes. She wears a white top and robe with red trim as well as black pants. She wears red and gold armor plating on her legs, arms and shoulders. She has a red and gold headband.

Tenzen transfered the Phoenix's blessing to save Iroha's life, causing her to remain alone in the blackness until a spirit appeared before her and sent her back in time to Vana'diel in 898. Iroha makes her way to Reisenjima to find the adventurer by a rowboat. As she is not under the goddess's protection as a time traveler who came to an age before she was born, it causes time itself to stand against her as it attempts to correct the situation with her death during a storm at the Bastore Sea. Iroha is saved by Gilgamesh who brings her to Norg where she finds the adventurer and tells them her story and gives the hero a relic from her shrine, a orb that connects the bearer to the Mothercrystal.

She kneels over but is revived by Phoenix through the lifestream, restoring her physical form, though the resurrection places a strain on her soul. She accompanies the adventurer and Zeid, only to learn that Volto Oscuro and the mind-controlled Avatar Siren had followed her to jump-start the formation of Escha. Iroha uses up most of her power to stop Volto from harming the adventurer before returning to her time and Siren is freed from Oscuro's control. Iroha later returns to the present when the adventurer searches for Prishe, agreeing to meet Tenzen in Jeuno before meeting Prishe. Iroha loses her Phoenix's blessing to Volto Oscuro and fades away. While the blessing is restored by Alexander, he tells the party that Phoenix's blessing cannot revive her forever, and the only way to save her is with help from Cait Sith. However, Cait Sith is unable to assist them as Iroha later appears at the coast, encountering the Siren of her time.

After learning what occurred in her absence, Iroha convinces the adventurer to train her. After being told she can be saved from her fate by the goddess Altana herself, Iroha suggests seeing the Kuluu at the Temple of Ugglepih for clues to how they can meet the deity. They meet the spirit of Grav'iton, who suggests Selh'teus may assist them. Oscuro interferes during the metaphysical meeting and drives the attending Avatars away, forcing Iroha to leave the party to capture Oscuro in the Escha version of Ru'Aun so she can conduct a ritual with Siren and her present-day self, Siren Prime. Doing this would destroy Iroha, as the process removes all time-displaced beings. Tenzen stops them at the last second with Kagero talking sense to Iroha while Oscuro escapes with help from Balamor.

Selh'teus is creating a mothercrystal for Reisenjima and would offer his being for its creation. Iroha meets him in the Empyreal Paradox where she witnesses both the new mothercrystal's creation along with the revelation that Oscuro is a future version of the adventurer. Iroha uses Phoenix's power to save the adventurer from being consumed by Oscuro's darkness, finding herself on Reisenjima. She recuperates in the presence of the mothercrystal that Selh'teus became before the adventurer finds her. She requests aid in driving off the monsters and Naraka that have infested the island.

When the adventurer returns from the Abyssea, Iroha realizes they sent her back in time to change the events of the Reckoning which birthed Oscuro. Iroha appears after the adventurer and Oscuro rejoin, thus restoring the Reckoning and the flow of the Winds of Time. She is at first delight to know there is a bright future, but then learns the future is unchanged, as the Cloud of Darkness has taken residence within the Reisenjima mothercrystal. She returns to the crystal to fight it and is nearly killed when the adventurer arrives to revitalize Phoenix with the energy provided by the Avatars with Selh'teus adding his power to the restoration as well. Iroha's hair and eyes turn red while she helps the adventurer defeat a fully manifested Cloud of Darkness. Iroha and everyone whom the adventurer touched revive them, and she finds them and brings them to the shrine where the others wait for them. With her mission over, Iroha bids goodbye to the adventurer and returns to her time after giving her mentor a lock of her hair containing Phoenix's blessing.

Iroha appears in the series of four-panel manga illustrated by Tomokichi.

Iroha appeared during the "A Maiden's Rhapsody" event in 2015, and again when the event was repeated in 2017, 2020 and 2022. She has mysteriously awoken in Eorzea near Costa del Sol after the events of Rhapsodies of Vana'diel, with only vague memories of her past. She is found by a reporter from Limsa Lominsa and the Warrior of Light, the latter of whom agrees to help train Iroha to master the technique Amatsu: Kyori, in hopes that it might jog her memory. While journeying around the world to complete certain FATEs, she regains her memories and masters Amatsu: Kyori.

Iroha recounts her past and the events of Final Fantasy XI, and tells the Warrior of Light that they remind her of her Master. Convinced that her adventures in Eorzea are but a dream, she closes her eyes, resolved to awaken once more in Vana'diel. When she opens her eyes again to find herself still in Limsa Lominsa, she believes it is the will of the Goddess Altana for her to remain in Eorzea. She resolves to continue her training until one day she can return home.

Iroha appears as a playable character. 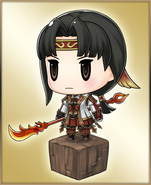 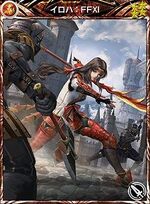 Iroha in the promotional artwork of Rhapsodies of Vana'diel.

[view · edit · purge]The Iroha (いろは?) is a Japanese poem, probably written in the Heian era (AD 794–1179). Along with being a treasured example of prose and beauty of transience in Japanese culture, it is also important to Japanese literature and language as an isogram to introduce all syllables to beginning learners.