Final Fantasy Wiki
Register
Don't have an account?
Sign In
Advertisement
in: Characters in the Chocobo series, Chocobo to Mahou no Ehon: Majo to Shoujo to Go-nin no Yuusha Characters
English 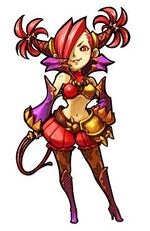 Irma (イルマ, Iruma?) is a recurring non-playable character in the Chocobo series. Her first appearance is that in Final Fantasy Fables: Chocobo Tales. She is often a rival to the main character along with her partner, Volg the chocobo.

Irma plays the role of an antagonist. She is helping Bebuzzu return to his true form, for unknown reasons. She believes that love is a hindrance, and that no intelligent creatures should love another.

When Irma was young, she lived with her mother and father on the edge of the forest on Chocobo Island. However, one day her father suddenly became ill, and started talking in his sleep. Irma's mother, as stated in her diary, heard him say that a foul creature was inside of him. He disappeared, never to return. Even though her mother just told her that her father would come back soon, Irma was smart enough to know he was never returning.

Her mother eventually came down with a deadly disease, similar to tuberculosis, and was mainly bed ridden. One day, her mother came home with a little black chocoling, whose own mother had been brutally killed. Irma grew close to the little chocoling, and named him Volg.

After her mother's death, Irma traveled the world with Volg. Upon Bebuzzu's release, Irma was contacted by the Darkmaster Bebuzzu and given the dark crystal. It was up to her to gather the power of the four crystals, so that Bebuzzu may restore himself. Setting out with her crew of Jailbird chocobos, she set out to manipulate Chocobo, Shirma, and Croma and lead her to the crystals.

Whenever the heroes reached a crystal, Irma would appear and absorb its powers into a dark crystal, restoring Bebuzzu. After absorbing the dark crystal, Bebuzzu reveals that he has been controlling Irma the whole time using the dark crystal, and that she is a descendant of one of the legendary light warriors. Once she is sacrificed, he will be able to fully restore his powers.

Chocobo and Volg follow Bebuzzu into the dark world, where they fight Bebuzzu to release Irma. They succeed, and Irma is freed. After leaving the dark world, Irma is still the same, but before she leaves with Volg, she thanks the party.

Irma, along with Volg, snatched a treasure called "Timeless Power"―which Cid and Chocobo were going to take, at the Tower of Sands. However, things don't go according to her plan when both she and Volg get sent to Lostime. Separated from Volg, Irma suffered total amnesia and assumes the persona of Amouri, becoming the complete opposite of herself.

Later, however, Chocobo discovers her and restores Irma's original personality with memories of her actions as Amouri to her disgust. At once, she ordered them to leave her alone. Though not overtly grateful, Irma later shows her appreciation by returning Timeless Power to Cid so they can leave town, and her humiliation, behind. With the barrier gone, Irma thanks Chocobo and encourages him to find "his treasure" and never let go.

Irma appears as a Princess in one of the story books. She is in the first picture book, "The Wolf that fell in Love", as the princess of Barnad. Early in the story, there are rumors of her father finding a suitor for her to marry.

Irma was revealed to be a playable racer in Chocobo GP .

Irma is voiced by Hunter MacKenzie Austin in the English version of Final Fantasy Fables: Chocobo's Dungeon. She is voiced by Christie Cate in Chocobo's Mystery Dungeon Every Buddy!. 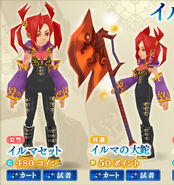 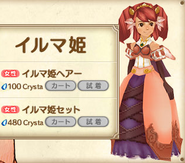 Princess Irma from Majo to Shoujo to Go-nin no Yuusha.

[view · edit · purge]Irma is a female given name that comes from the Old High German irmin, meaning "world." The anglicised form is Emma.