Cid Pollendina: Oh, shut up and help me remodel the Ipsen's Castle page!
Please expand this article into a full one. The following tasks need to be completed:

Ipsen's Castle is a location on the Forgotten Continent in Final Fantasy IX situated in a natural depression, well below sea level. The building itself, inside and outside, is an architectural marvel, much like M.C. Escher's drawing "Relativity". Many rooms are upside down and in one room the visitor has to slide up a pole.

While in Ipsen's Castle, weapons will do more damage the lower their attack power is. Weak weapons are sold by a local moogle, and the characters' default weapons can be found in many of the treasure chests. The unusual set-up does not extend to armor, add-ons or magic.

The reduced weapon damage while in Ipsen's Castle is due an alteration in the base damage formula:

Due to steep, canyon-like walls that surround the castle, it can only be accessed with Choco or by airship. It is possible to evolve Choco to red (mountain-crossing) or even dark blue (ocean-crossing) by the time the party first visits the Forgotten Continent, so it is possible to visit Ipsen's Castle before it is mentioned in the story. If the party does so, however, the castle appears on the map as "?" and, although the area can be entered, the front door is closed. In the endgame, Ipsen's Castle is surrounded with a thick Mist.

Ipsen and his good friend Colin worked at a tavern in Treno. One day, Ipsen got a letter. The letter was so wet from rain that most of the writing was illegible. The only part he could read said, 'Come back home'. Nowadays, we have airships and stuff, but back then, it was really hard to travel. He didn't know why he had to go back, but he got some time off, gathered his things, and set out on his journey home. He walked a thousand leagues through the Mist. Sometimes he was attacked by vicious monsters, but he made it, because his friend Colin was by his side. And then, after much time on the road, he had to ask Colin something:
"Why did you come with me?"
"Only because I wanted to go with you."

According to the Final Fantasy IX Ultimania, Ipsen's Castle is one of the locations from Terra that ended up on Gaia 5000 years ago due to Garland's failed attempt to merge the two planets into one.[1] The origin from Terra is made clear by the unusual-looking treasure chests, as Terran treasures are blue, whereas Gaian chests are wooden.

The castle is named after the explorer Ipsen, who is thought to be the first to discover the castle. Another etymological origin derives from Latin where ipse means it/her/himself, so as Lady Hilda decides on the castle's name, she means it will be called the "no name castle"—the "ipsen" castle (literally translated: the castle itself).

When the party is sent to Ipsen's Castle to retrieve the four elemental mirrors Amarant challenges Zidane to a race, saying that he "works alone". The party ventures through the maze-like interior, made all the more confusing due to the castle's mirrored structure. Amarant wins and vacates the premises after declaring his disbandment from the party. Zidane and his friends collect the mirrors, but are interrupted by the monster, Taharka, the mirrors' guardian.

Upon exiting the castle, the party discovers Amarant hasn't come out yet. Zidane scours the castle and finds and rescues him. When the two return, Zidane formulates a plan to raid the four elemental shrines, whose locations are marked by the mirrors' placement on the mural they were found in.

Getting through the castle[]

After the party returns from Terra they can start a side quest to fix Mognet Central by talking to Kupo in Alexandria. As part of this chain of correspondence Mogryo from Black Mage Village sends a letter to Kumool:

Kumool in response sends a letter to Mois at the entrance to Fossil Roo at Qu's Marsh in Mist Continent:

The character who comments on Zidane being able to understand the mysterious language depends on who is in the player's party. The priority is Eiko → Steiner → Vivi → Freya.

After the battle with Taharka, on the way out of the castle, a cutscene will play showing one of the non-Zidane party members nearly falling into a trapdoor. The priority is Garnet → Eiko → Vivi → Quina.

Ancient Aroma is an add-on found within the castle. It teaches Dagger the ability "Odin's Sword", which, when equipped, allows Odin to deal damage to enemies that survive the Instant Death.

To obtain the Ancient Aroma the player must solve the puzzle of the rotating tablet near the elevator to the mirror room. When prompted, Zidane is required to examine, push, pound, think, push, think, try something drastic, and rest to flip the wall and gain access to a new area. This opens up a door in the dungeon's entry foyer, directly to the left of the first door the party entered. The new passage leads to a large glowing sword with three ledges and two pots. (This room also has a treasure: Golem's Flute.)

A voice within the room whispers, Fight the flow of time, implying the pots must be picked up and placed on the next ledge counterclockwise from their present location. After both pots are rotated thrice, the electricity within the blade will fill one pot, from which the Ancient Aroma may be collected.

Quina can eat a Cerberus to learn Auto-Life, a Gargoyle to learn Mighty Guard, and a Veteran to learn Doom. This is the first place where Quina can learn the latter.

The world map areas outside Ipsen's Castle consist of Yuanshao Peninsula and Hadris Basin. Ragtime Mouse may also appear here inside forests as part of his sidequest. Though the below lists have enemies since "disc 1", in a normal playthrough the player can't come here until Zorn and Thorn bring the party to the Forgotten Continent on the Hilda Garde I as part of the story.

The theme that plays in Ipsen's Castle is known as "Ipsen's Castle" or "Ipsen's Heritage". It is a rearranged version of "A Place to Call Home", a theme associated with Terra and Zidane. The theme is included in the Final Fantasy XV music player.

An arrangement of this theme appears in Dissidia 012 Final Fantasy as Zidane's dungeon theme.

If, instead of going to Ipsen's Castle by airship (as part of the story), the player goes there by chocobo, upon leaving the dungeon, the chocobo will be replaced by the party's airship.

If the player attempts to leave the castle before meeting Amarant, Zidane will comment, "I can't leave until I've finished my game with Amarant," and "I'm gonna find it before him." If Amarant has been found, but the party has not yet examined the mirrors, he will comment, "I gotta find out how to reach Terra before we leave here...I should look around some more." Finally, when playing with Zidane alone as he looks for Amarant, exiting will result in him stating, "...Wait. I haven't found what I'm looking for. Where is he?"

After the events of this location, Amarant, who, up to this point, has gone without posing at the end of battles, will finally begin to perform a victory pose. 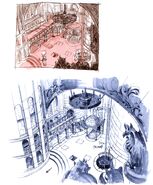 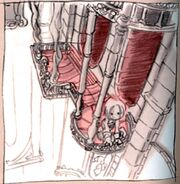 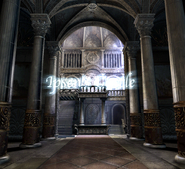 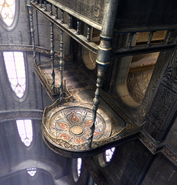 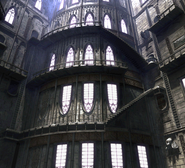 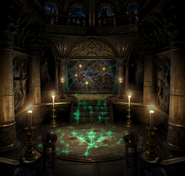