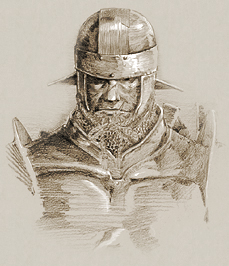 Invincible Shield is the name of a Galka warrior in Final Fantasy XI. There is also a Galka with the same Given Name, generally a noun and adjective given to Galka by their Hume counterparts in Bastok (and a cause of some resentment), that exists in the game. Since Invincible Shield was never mentioned as dying, it is quite possible they are one and the same.

Invincible Shield can be viewed in action in campaign battles. He is a part of the Centuria of the Republic of Bastok and often is deployed to North Gustaberg 'S' to help repel the marauding hordes of beastmen.

Achievements: While a centurion, engaged in numerous battles with the San d'Orian knights and the Mithran Navy. While a praefectus, led skirmishes against the Quadav Shieldwarriors and thwarted various ambushes conceived by the Sahagin. After being promoted to legatus, focused efforts on eradicating the growing number of pirates on the Bastore Sea.

After the Great War, Invincible Shield retired from his position of legatus, and spent the next several years writing the world-renowned "Ginuva's Battle Theory" while continuing service in the Republican Army’s first reserve.

However, during a tour of inspection encompassing several countries in the Far East, Invincible Shield obtained crucial information that hinted at impending danger for Bastok and eventually all Vana'diel. Upon his return to the Republic, he immediately reenlisted himself in the army and returned to his position as legatus. Invincible Shield's current duties focus on the retraining and reeducation of the Republican Army's forces using methods based on various Conflict exercises.