I just needed to borrow the power from wretched souls that can't die... Where did I acquire it? It was the Invincible, or should I say, that large eyeball in the sky?

The Invincible is an airship in Final Fantasy IX. Constructed by the Terrans, it is an ancient battleship geared for war and enslavement. The Invincible possessing an "eye" on its underside is a recurring design trait in structures built using Terran technology.

According to ancient Terran recordings at the ruins of Oeilvert, the Invincible was developed many times to refine it into a perfect tool of war. The final version was used by Garland, who recognized its potential as a weapon. The Invincible's underside contained a large, crimson "eye" that fired a devastating energy beam and could enslave eidolons.

The Invincible hosted numerous souls trapped within it, apparently absorbing them in events such as the Second Battle of the Iifa Tree.[note 1] The Invincible was Garland's method of traveling between the two worlds of Gaia and Terra. Kuja was never seen on-board the Invincible, even though he worked with it.[note 2]

A young Sarah and her mother sailed away from the burning village of Madain Sari. Garland attacked the city with the Invincible in fear of the resident summoners' ability to call forth eidolons, a talent that could hamper his plans to assimilate the world of Gaia into Terra. Though Sarah repressed these memories and assumed a new identity as "Princess Garnet", the hazy memory of the eye in the sky haunted her.

Kuja, having gained control of the ship, used it to possess Bahamut at the shores of the Iifa Tree and commanded the eidolon to kill Queen Brahne. Princess Garnet ascended Alexandria's throne, though her coronation ceremony was when Kuja, relishing his new powers, sent Bahamut on a rampage through Alexandria. The dragon's flames were quelled by the eidolon Alexander Garnet and Eiko Carol summoned together. Though Bahamut was vanquished, Kuja attempted to enslave Alexander instead. This failed, as Garland, fed up with Kuja's insolence, appeared on the decks of the Invincible and used it to destroy Alexander.

When the party ventured to Terra, they spied the Invincible levitating above the entrance to Bran Bal. Garnet fainted upon seeing the ship, recalling her childhood trauma. The heroes confronted Garland within Pandemonium, but Kuja, having arrived to Terra on a Silver Dragon, stole the Invincible and, being a Genome, took power from the souls residing within the ship into his body to achieve Trance.

After Kuja murdered Garland, Zidane and his friends—along with the resident Genomes—took control of the Invincible and piloted it back to Gaia. The party used it to fly it into Memoria.[note 3]

The Stellazzio coin, Pisces, can be found on the airship's deck.

Unlike the Hilda Garde III, which can only land on grassy areas, the player may land the Invincible on barren lands, desert areas, swampy areas, or snowy areas on the world map. Neither airship can land in forests.

The Four-armed Man in Daguerreo plays the Invincible card exceedingly rarely, but he permanently leaves if the player talks to him with a perfect Treasure Hunter Rank. Master Phantom in Memoria's Stairs of time area also uses it.

Invincible flown on the world map.

Bridge during Second Battle of the Iifa Tree. 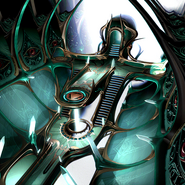 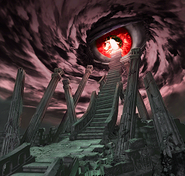 Memory of Invincible's "eye" in Memoria.

The emblem of Terra imposed on the Invincible as it prepares to strike.

The "eye" of the Invincible.