The Invincible is the largest airship the Ancients ever built! Its engine is powerful enough to fly above the highest mountains!

The Great Ship Invincible is the final airship found in Final Fantasy III. It is located in the Ancient Ruins and obtainable after awakening Unei. The Invincible is similar to a town, complete with an inn and shops for magic, weapons, armor, and items with a place to summon the fat chocobo. In the DS version, the moogle allows access to Mognet. In the iOS/Steam/PSP versions, another moogle allows access to the Bestiary and Achievements.

The Invincible does not land; the party enters and exits it via a ladder. Battles onboard the ship begin with a volley of cannonfire at enemies, and the ship's engines can be temporarily boosted to allow the ship to "jump" over small mountains.

The Invincible was an enormous battleship built by the Ancients. Despite being considered the grandest airship ever constructed, it fell into obscurity along with the civilization that birthed it when its creators attempted to harness the power of Light for their own gain, inadvertently causing the "Flood of Light" that nearly destroyed the planet. Though the Warriors of Darkness were able to save the world, the Ancients exiled themselves in shame, leaving the Invincible, along with the rest of their innovations, behind.

During their quest to find the four Crystals, the Warriors of Light learn that the Crystal of Earth is hidden beyond a towering mountain range that no modern airship can scale. After speaking with the sorceress Unei, the heroes learn of the Invincible that rests in the Ancient Ruins near the Kingdom of Saronia. After braving the labyrinth's depths along with Unei, the four youths salvage the airship and pass over the mountain peaks to continue their journey.

The Invincible features an enclosed main deck that serves as the bridge that houses its amenities, as well as an exterior upper deck only seen in battle. Players are taken inside the ship automatically when boarding it from the world map, and can also enter it manually while in mid-flight by hitting the "cancel" button.

While inside the ship, players have access to beds to recover HP and MP, four shops, and an area to summon a fat chocobo for item storage by using a Gysahl Green. In the Nintendo DS version, the interior also includes a moogle who can open the Mognet menu. The iOS/Steam/PSP versions include another moogle next the the Mognet moogle; speaking to him will bring up the Bestiary and Achievements pages. Taking the downward stairs will return the player to the world map, while interacting with the ship's wheel will allow them to take control of the airship.

The Invincible has four shops accessible when the player is inside the ship's main deck. These are not manned, but have items placed on a counter that opens a menu when interacted with.

"To the Mountain Top"

The theme that plays when a player pilots the Invincible across the world map is simply called "The Invincible" on the NES version, which appears as track 39 on the original soundtrack. An arranged version appears in the 3D remake which is track 50 of that version's soundtrack.

When the player is exploring the inside of the airship the theme used is called "The Way to the Top" on the NES version, which was renamed "To the Mountain Top" on the DS remake. These are found as track 11 and track 13 on their respective albums.

The Invincible appears as one of the difficulty modes of the Duel Colosseum. The enemy levels in this mode range from 61 to 90.

The Invincible is an Easter egg in the Final Fantasy III stage, The Floating Continent. After the stage transforms, the fog dissipates revealing the Crystal Tower at the horizon and the Invincible appears ascending from the sea of clouds and starts flying around the stage.

The Invincible appears as a skin of the "Player Airship" during the update of March 18th, 2018.

The Invincible is a secret racer and the fastest character. Its top speed far excels what a fully customized racer can go to but it has horrible cornering, so it will take some doing to master this racer. As a CPU racer, it will hold every stone it gets, even Haste and Reflect stones, which can make it unfair as absolutely nothing can stand against it. Putting Handicap on it will rise its top speed over 200 MPH. 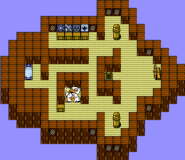 The interior of the Invincible (NES). 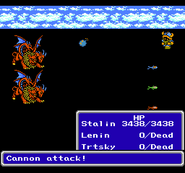 The name may originate from Stanislaw Lem's story of the same name, where the Invincible is a space ship.