This ancient airship, the Invincible... We unearthed it from the ground here. It is powered... by the Heart of Babel.

The Invincible is an ancient airship from Final Fantasy Brave Exvius. A mysterious airship of unknown origin, it was refurbished by the first Cid, also known as "Veritas of the Heavens". It is powered by the Heart of Babel.

Some time before the events of the game, the Sworn Six of Paladia needed a means to survive the catastrophe that would naturally result from the destruction of the eight crystals, the collective seal of the dimensional gate through which they (and the battlefield they stood upon) had been banished to Lapis. For that purpose, Cid decided to use Invincible. He recruited dwarves to help unearth Invincible from the ground below the decommissioned Mobreeze Airship Factory and to refurbish it. As they thought Cid was great man (as he had introduced airship technology to Lapis), they agreed to do so for his sake. He also recruited the help of Dilmagia's foremost engineer, Evan, who was under the influence of Dr. Lazarov.

When Rain, Lasswell, Fina and Lid pass through the supposedly-abandoned factory to go to the Wind Shrine, they find the airship and the dwarves working on it. Lid asks one of the dwarves about the ship, but the dwarf says they have never gotten the Invincible off the ground in spite of it being powered by the Heart of Babel—due to the sage and his power being sealed by the Wind Crystal. Before they can find out more, the party flees due to the security system, and find out that Lid's brother, Evan, is working on the airship as well.

The Invincible is not used to freely travel on the world map (due to it being as a series of fixed contact points, with a fixed set of dungeons located in each area, to be freely accessed at any time by spending energy). Rather, it is used for story purposes and, from Season Two onwards, to travel freely between Lapis and Paladia.

Towards the end of Chapter IV, the party boards the Invincible, resulting in two dungeons: its exterior and its interior, which also features a exploration. 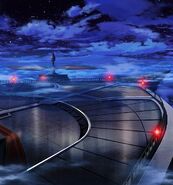 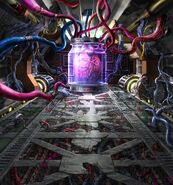