Non-player character
Interceptor is a character in Final Fantasy VI. He is Shadow's loyal dog, and does not leave his side.

Yoshitaka Amano artwork and Interceptor's game sprite suggest he is most likely a Doberman Pinscher, Beauceron, or a mix of the two. He may also be related to the Vector Hound enemies due to a strong resemblance between them.

Interceptor is fiercely loyal to Shadow and accompanies him everywhere, only straying from his side when his loyalties are torn between Shadow and Relm. He is ferocious in battle and attacks enemies at Shadow's commands; Shadow claims Interceptor eats strangers, but this is never shown and may merely be a threat to back away. Interceptor does not get along with the other party members save for Relm, but he comes to trust them enough to return to them when he is separated from Shadow, and then to approach them to lead them to either Shadow or Relm when they are injured.

Shadow acquired Interceptor while living in Thamasa. When he decided to leave town to avoid his past as a train robber catching up with him, he instructed Interceptor to remain with his daughter, Relm. Interceptor disobeyed however and left with Shadow, and the two became inseparable.

Interceptor accompanied Shadow on his journeys through South Figaro, the Doma region, and Kohlingen. Shadow offered to sell his services to the Returners in Kohlingen, claiming the 3,000 gil fee was to feed Interceptor on the journey. When Leo and the Empire allied with the Returners to search for Espers, Shadow was in Albrook and hired by Leo to aid their expedition. At Crescent Island, Shadow was assigned to accompany Locke and Terra to Thamasa.

At Thamasa the group met Strago, who happened to be Relm's adoptive grandfather; Interceptor was reunited with his child owner after a decade and became friendly and playful with her, something that perplexed Shadow and his comrades. When they left Shadow called Interceptor to heel, which he did after hesitating and looking back at Relm. The group stayed at the inn, and during the night Strago came in to ask for their aid in saving Relm from a burning house. Shadow feigned being asleep and ignored Locke's prompts to join them, but he noticed then that Interceptor was gone.

In the back of the burning house, Strago, Locke and Terra found Relm unconscious and being guarded by Interceptor. The house was unstable from the fire and began to collapse, and the three were also knocked out. As Interceptor fended off monsters coming for the party, Shadow arrived and dispatched them, and rescued the group with a smoke bomb. The next day, as Strago explained that the citizens of Thamasa can use magic, Shadow slipped away. When confronted he claimed he had only rescued them to save Interceptor, and would search for the espers on his own. As he left Interceptor lingered with Relm until Shadow called for him.

Shadow returned to work with the Empire, but they attempted to kill him once he outlived his usefulness to them. Interceptor was wounded and made his way back to Thamasa and Relm; due to the fact he returned alone and injured, the party presumed Shadow to be dead. Interceptor remained in Thamasa as the party attacked the Floating Continent and found Shadow.

In the World of Ruin, when the party explored the Cave on the Veldt, Interceptor approached them and barked at them before running deeper into the cave. The party followed him and found Shadow wounded and being guarded by Interceptor. As they check on Shadow, the Behemoth King emerges and attacks them. With the creature defeated, the party took Shadow and Interceptor back to Thamasa to recover, Interceptor standing guard over him. Shadow soon left town with his dog to compete in the Dragon's Neck Coliseum, where the party found him and recruited him.

After the party defeated Kefka and fled his tower, Shadow paused and did not follow them. He pushed Interceptor away, but then knelt and wished him well, before going and being alone to face his death in the tower's collapse. It is assumed Interceptor followed the party and escaped.

Shadow has a passive, invisible status in battle that will cause Interceptor to block attacks against Shadow, nullifying the damage, and counter with an attack. There is a 50% chance of Interceptor blocking the attack, and it takes priority over other evasion or block effects, such as the Black Belt's counterattack effect or Golem's shield. However, Interceptor can only block physical attacks, and only those that could be blocked or evaded normally. Interceptor's counterattacks are Wild Fang and Takedown, with a 50% chance of using either. Wild Fang has 66 power and Takedown has 55 power; both deal defense-ignoring magical damage to a single target, but miss if the target is Floating or too long.

Interceptor makes a cameo appearance alongside Shadow and acts as tutors for the in-game manuals.

Interceptor appears in Shadow's official artwork, but did not appear in the game until the introduction of Relm. With Shadow's EX ability Shadow Fang, Interceptor joins him in battle as a status buff; while active for up to six turns, Interceptor will either counter an attack on Shadow or follow up an attack from Shadow. 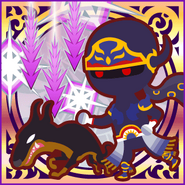 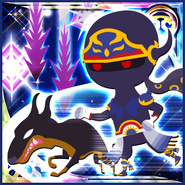 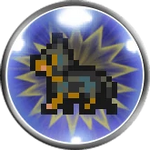 Interceptor appears in one card for the game, represented by his Amano art with Shadow. As in Final Fantasy VI, Interceptor protects Shadow, reducing all damage to the player's Shadow cards to 2,000, and he is able to use his Wild Fang ability to increase his power temporarily. 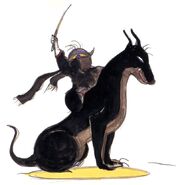 Concept art of Interceptor with a miniature Shadow.

Interceptor intercepting a melee attack that would have otherwise harmed Shadow.

Interceptor's name is befitting to his role in the game, intercepting attacks for Shadow. [view · edit · purge]An interceptor is a person or thing that stops or catches (someone or something) going from one place to another.