City of Dying Dreams:
The Nucleus:

Depending on area:
Bosses:
Inside Sin, known as just Sin in the menu (but called Inside Sin at the Monster Arena) is a location in Final Fantasy X, and the game's final dungeon. It is located inside Sin, a gargantuan whale-like beast that threatens all life on Spira. This is the only storyline location (the optional Omega Ruins dungeon being the other) that must be manually filled in by the player by traversing the area, highlighting its unknown nature.

The final area of inside Sin, Dream's End, is briefly glimpsed when Tidus is first absorbed into Sin from Dream Zanarkand. He is teleported to Dream's End, where a vision of Jecht stands on the central platform. After Tidus "swims" toward the platform, he is transported to the submerged ruins. Another section, the Nucleus, is seen in the aftermath of the disastrous Operation Mi'ihen, where the spectral visions of the Crusaders wander around the more corporeal form of Bahamut's fayth.

After Summoner Yuna has abandoned her pilgrimage and decided not to let Yunalesca turn one of her guardians into the Final Aeon to defeat Sin, the party looks into new ways of tackling the beast. They decide to use the party's airship, Fahrenheit, to fight Sin in a way no one has ever attempted before.

When they penetrate Sin's armor, the party makes their way inside Sin and toward the center, where Yu Yevon rests. On their way deeper into the beast the party faces Seymour Guado, who has been absorbed by Sin, for a final battle, after which Yuna sends him at last. They continue to the City of Dying Dreams where they enter a colossal tower and end up in the Nucleus. After they obtain ten egg-like crystals, they are transported to Dream's End, the center of Sin.

The party meets Jecht talks with Tidus before transforming into Braska's Final Aeon. After Jecht is defeated, Tidus says he's proud to have him as his father. Yu Yevon appears, and Jecht and the aeons tell Yuna to call them, and Jecht fades away. Yu Yevon's spirit seeks a new host and possesses Yuna's aeons one by one. The party defeats the aeons until Yu Yevon has no more host bodies to possess, and then defeats Yu Yevon himself.

Upon Yu Yevon's death, Sin is destroyed for good and it explodes above Bevelle, while the party escapes on their airship.

Most of the areas are based on the ancient Zanarkand, but are distraught projections of it.

The name of the area where the party fights the aeons and the final boss is never revealed.

In the City of Dying Dreams area, the player will find a glyph on the right wall. The first glyph tells the player to kill ten fiends. After doing so, the player returns to the glyph and touches it to reveal another. The player must kill ten more to open the next door, and then fifteen to open the final one. A quick way to achieve this is to battle a party of three enemies (like Exoray's group). After the player has opened all three doors, they will find a chest with a Lv. 4 Key Sphere.

In the Nucleus area, small floating egg-like crystals appear alongside spike crystals popping out of the ground. The player must touch the floating crystals and avoid the spike crystals. The egg crystals disappear after a short time, so one must grab them quickly when they appear. Each will yield an item in a random order:

The Dream's End (夢の終わり, Yume no Owari?) area is the representative arena of Final Fantasy X. Unlike most arenas, Dream's End is only used for the two fights against Jecht: one in Tidus's storyline and the other in Shade Impulse. No other bosses are fought at Dream's End, though a handful of cutscenes occur here, including Firion and the Onion Knight's respective conversations with Cosmos.

The arena consists of the ruined Zanarkand blitzball stadium surrounding a circular platform over a field of lava, which is treated as a banish trap. A massive replica of Jecht's sword appears on the central platform, much like after defeating Braska's Final Aeon in Final Fantasy X. Long grind bars run along the outer edge of the arena, connecting the central platform to the ruined "stands" on the opposite side. In the Ω version of the stage, every time a character guards, dodges, or lands an attack, the Bravery pool increases, and when damage is dealt it increases by an amount equal to the damage dealt.

The Moonflow is the battlegen item obtained through stage destruction in this area.

Dream's End returns. In the 12th cycle, Yuna faces off against the Emperor here after he struck down Tidus.

Dream's End and the Garden of Pain return as the BMS for "Otherworld", "A Contest of Aeons", and "Fight With Seymour" respectively. 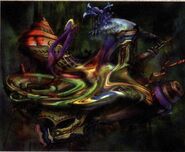 The Fahrenheit inside Sin.

Dream's End before the final battle.