Cid Pollendina: Oh, shut up and help me remodel the Inn page!
Please expand this article into a full one. The following tasks need to be completed: 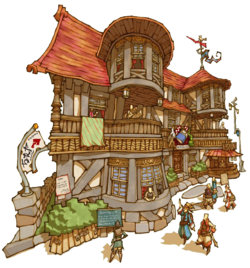 Restore HP/MP and cure status ailments such as K.O.

Inns (やどや / 宿屋, Yadoya?), also called hotels or lodgings, exist in almost every Final Fantasy game. Although there may not be an actual inn, there are generally areas where the party may rest, existing in the form of a bed or tent.

When the player characters rest their HP and MP are restored, and most status effects are cured. Sleeping at an inn usually costs gil. Usually, staying in an inn is the cheapest way of restoring the party's health, as opposed to using items such as Tents or Cottages. The music that accompanies an overnight stay is usually called "Good Night".

In the original NES version, the player can stay at inns to heal the characters' HP and recover magic charges. This is the only way to recover the party besides Tents or Cottages, as the NES original has no Ethers.

Saving was only possible by sleeping at inns or by using a Tent or Cottage until the Dawn of Souls version. KO'd characters are not revived during a stay at an inn. The inn prices differ from town to town.

The inn prices depend on how much of the party's HP and MP need restoring. KO'd characters are not revived.

In the NES version,

, where HP and MP are the total amount of HP and MP, respectively, to be restored; results are to be rounded down by integer. In other words, every 4 HP or 1 MP cost 1 gil to heal.

The player will be allowed to stay at an inn for free if all party members are fully recovered.

Inns fully heal the party and feature item shops inside. The inn prices vary depending on the location.

Inns retain the function they had in previous installments, but the player can get free stays due to storyline events; for example, the attack on Rydia in Mist.

Inns act the same way as the previous game. While there are inns in both the Feymarch and Cave of Eblan, the player can't sleep there.

Inns act exactly the same as they do in Final Fantasy IV, but with the introduction of the Moon Phase system, it has the added effect of changing the moon to the next phase. The only time it doesn't do this is during the Eblan Four's missions in Edge's chapter.

The player can have free stays thanks to storyline events, but that also happens in places that aren't inns, like the case of Zok's house in Tule.

Like other games, inn prices vary depending on the town. If the party stays at any inn while Shadow is a party member, there is a chance he will have a dream. There are four dreams which are episodes of Shadow's past.

With varying prices, inns appear in every town, and fully restore HP, MP, and remove status effects. Sleeping is sometimes required to move the storyline forward, such as at the Forgotten City. In Bone Village taking part in the excavation minigame counts as staying at the inn, and the party will be healed by the morning.

Inns are called hotels and offer save points and resting areas to restore health and status. In many hotels the player can find issues of Timber Maniacs.

Some of the hotels contain bonus story plots or act as the location of major story events.

Inns appear in nearly every city and town, and many with resident moogles to save the player's game. Prices vary per inn. Sometimes, the party stays for free at the castle in Lindblum for story events.

Inns make a less frequent appearance, as the game's save spheres offer immediate, free healing. Instead, inns appear in the form of travel agencies, an Al Bhed-owned chain of establishments across Spira. The travel agencies are owned by an Al Bhed named Rin.

The travel agencies no longer house guests and now they only sell items. It is possible to rest at the cabin in the Celsius free of charge. Resting in the cabin once each chapter unlocks a bonus scene in the final chapter. If the player asks for the services of the travel agency in Guadosalam, the innkeeper will reply "There's a chair, use it."

Inns recover health in exchange for time. Lightning can rest at inns, which are found in various locations. The player can rest at an inn until the hour of their choosing and restore all of Lightning's HP. The latest one can stay is until 6 AM when Lightning must return to the Ark.

In version 1.0, players could gain access to a private inn room in each city-state after completing a sidequest. By logging out or staying inside those rooms, players started gaining a "rested bonus", which provided 50% extra experience when killing enemies under its effect for a set period. Choosing to logout by sleeping on the bed presented a unique sleeping animation for each race and a relaxing remix of the "Victory Fanfare".

While sleeping on the bed did not provide bonuses to the rested experience, it was a required step for some quests and the Warrior of Light could dream while sleeping, which rewarded the player with food items if they checked the bed after the dream (e.g. if the player dreamt about incubating an egg, they could find a boiled egg by checking the bed after logging in). There was also the possibility of triggering a special nightmare cutscene as part of the Seventh Umbral Era events.

It was also possible to watch every quest cutscene previously seen by using the Unending Journey book and store Artifact equipment and seasonal events rewards in the Armoire.

Players could set up one inn room as a secondary home point, allowing easy access via the Return command. Crafting was disabled inside inn rooms, as it would consume the resting bonus while it accumulated. NPCs mentioned the restriction was a way to keep guests from disturbing the peace, but it was still possible to use loud single-target abilities like Flare.

Inn rooms returned in the A Realm Reborn relaunch, and are unlocked at level 10 in the main scenario. In addition to the Armoire and the Unending Journey, inn rooms also include a Glamour Dresser, an Orchestrion, access to unlocked minigames, a Summoning Bell to call retainers, and a Crystal Bell to summon the aesthetician Jandelaine once the appropriate quest is completed. Cutscenes of the player character falling asleep and waking up from the inn bed are also present when logging out and logging in, respectively. As inn rooms are part of major cities, players can accumulate the 50% rested experience bonus from logging out there.

As an alternative to camping, the party can pay to stay in hotels or caravans to rest and advance time to the next morning. The party will receive an EXP multiplier of up to 3x for staying in them, but can't cook while in lodgings.

Caelum Via is a hotel that appears in Kingsglaive: Final Fantasy XV as the location for a treaty-signing celebration.

Inns can be found in the towns of Aquaria, Fireburg and Windia. They all take a fee of 95G. A house in Foresta allows healing for free, so the player can get away with never paying for inn services—granted, the trip through the Focus Tower takes about a minute, so inns are more for convenience than necessity.

Inns functions no differently from other RPGs: by paying a certain amount of GP, Sumo's HP and MP are restored. It cost 10 GP to stay at the inn. A few inns are found on the overworld, and these ones cost 10 GP too.

Inns are almost functionally identical in the first two Final Fantasy Legend games, charging the player a rate based on lost HP. They also restore Mutant and Monster abilities to their full charge for free. For this reason, it can be cost-effective to use healing techniques before using an Inn. Inns cannot restore KO'd characters: this must be done instead at a House of Life.

Inns will also restore the use of items equipped to Robots (to the already reduced 50% maximum), and can now easily restore KO'd characters. Before going into an inn, the player should use the Cure ability to restore their HP if they have it. The innkeeper only charges for lost HP, and not for the lost uses.

Inns charge a cost based on lost HP and MP for all party members. The Berth unit for the Talon can provide a free, portable Inn for the party, but can be permanently lost if the player does not collect it before leaving for Pureland.

Inns are where the Heroes of Light restore their HP and AP and remove status effects.

Inns are generally establishments or buildings where travelers can seek lodging and, usually, food and drink.