Ingus is one of the main characters of the 3D remake of Final Fantasy III. He is first met at Castle Sasune.

Ingus has short blond hair and blue eyes. His Freelancer outfit is heavy armor and chain mail on his arms and legs, over which he wears a white shirt with puffed sleeves and a wide collar, and a red gambeson over that. Ingus's theme color is red, shown in his job armors. The white belt, gambeson pattern, collar, or green pendant distinguish his job outfits from his allies'. In the opening FMV, he is depicted as a Red Mage, as Red Mages are considered Sasune's elite warriors.

Doga and Unei describe Ingus as the light of determination. He takes his responsibilities as a knight of Sasune seriously, particularly his duty to guard the princess, Sara Altney. Although Sara has feelings for him and several people in the castle imply he returns them, Ingus does not openly show affection toward her and tries to behave only as her loyal knight. Ingus escaped the curse on the kingdom because he was away from the castle to train on his own.

He speaks in a much more elegant and formal manner than the other three orphans and positions himself as the elder of the group when he calls them "younglings". He prefers to analyze the situation before taking action, and doesn't hesitate to scold Luneth for being reckless or insensitive. He is depicted as the steersman for the airship in the opening FMV, reflecting his position as the responsible member of the group.

Ingus is a soldier who has sworn allegiance to the King of Sasune. He was outside the castle training when the Djinn cursed the castle. When he returned, he found Luneth, Arc, and Refia there and allowed them entrance as they were looking for a way to lift the curse from Kazus. Ingus was greatly concerned that Princess Sara had gone missing, and assumed the Djinn had kidnapped her. His fears turn out to be unfounded, as Sara had gone on her own to try and stop the curse.

After defeating the Djinn, Ingus is chosen to be a Warrior of the Light along with Luneth, Arc, and Refia. Although not any older than the other three, his experience as a knight make him the most outwardly mature party member, such as when he scolds Luneth for making fun of Arc in Saronia. He harbors concealed feelings for Princess Sara, who shares them, and the citizens of Sasune (including the king) keenly encourage them to get together. After they defeat the Cloud of Darkness, Ingus gladly assents to her request to stay at her side.

Ingus's battle prowess is determined by the job he is equipping. He starts as a Freelancer, but after making some progress, more jobs become available, and the player is allowed to freely change between them and accumulate progress in each. Whenever a character gains a level, their maximum HP increases by a random amount, thus, changing to high-vitality jobs—like Monk, Knight, Viking and Black Belt—before leveling up makes it easier to max out HP. 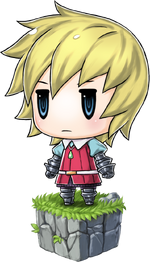 An alternate costume based on Ingus is available for Onion Knight in Dissidia 012 Final Fantasy. Despite being based specifically on Ingus's job outfit, Ingus himself is not mentioned in the Japanese name or description where it is called the "Deformation-Style", after the remake's artstyle and as a pun on the Nintendo DS.

In the Final Fantasy XIV: Stormblood Benchmark trailer, a blond male Red Mage assists a Monk in the battle. The Red Mage resembles Ingus in appearance from the opening of Final Fantasy III, who dons the Red Mage job in it.

Ingus appears in Final Fantasy: Memory of Heroes as part of the Final Fantasy III adaptation. Of the main characters, his personality is the most changed; Ingus is portrayed less stoically and is not be above calling Luneth an idiot. While the other characters use the Wind Crystal jobs as seen in the game's opening, Ingus instead uses the Thief job for most of the story.

Ingus is based on an NPC from the NES version who avoided the Djinn's curse due to being away from the castle at the time.

Dummied out dialogue hints that Ingus is descended from a resident of Falgabard: during a conversation in the Cave of the Circle, Doga notes Ingus's eyes resemble those of a Dark Blade wielder.[1] Text for Falgabard and the Cave of Shadows also show Ingus expressing vague familiarity with the area.[2][3]

Other unused scenes add to Ingus's character. In one of the Castle Sasune scenes, Ingus expresses shame at having done nothing during the Djinn crisis while Princess Sara left to seal the Djinn by herself.[4] He supports the Warriors of Light at various times, such as encouraging Refia to speak with a bard in Duster[5] or speaking up for Luneth in Castle Argus.[6] Despite this, Ingus is shown to occasionally come into conflict with his allies. He briefly gets into an argument with Luneth in the town of Amur after commenting Luneth being "light-hearted as ever".[7] In the Amur Sewers, while away from the rest of the party, Ingus admits that he finds them to be naive for having been chosen by the crystal, although he does become humbled after the Fellows help him attain the Levigrass Shoes. He comes into conflict with Arc twice: once preventing Arc from becoming an apprentice in Replito[8] and once (along with Refia) while trying to calm Arc down in Saronia. The latter resulted in Arc leaving the party in frustration, although Ingus later apologizes to him.[9]

Two scenes in the opening FMV depict Ingus and Luneth arguing in a castle and Ingus rescuing Luneth from falling off a cliff in the Molten Cave, although these scenes do not occur within the game itself. 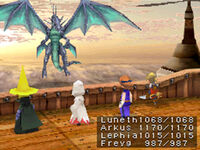 Prerelease screenshots show Ingus with the names "Freyrg" and "Freyg", while all other character have variant romanizations of their final Japanese names. Ingus's Japanese name ends in a "z" sound, so his name may derive from the proto-germanic Inguz (or Ingwaz or Yngvi), a rune and deity which is also another name for Freyr.