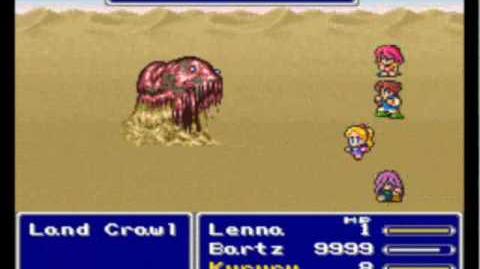 The infinite items glitch is a glitch in Final Fantasy V that allows the player to end up with an infinite number (shown as 55 in the inventory screen but is really 255) of just about anything in the game, and requires the Ninja ability Throw and the Thief ability Steal or Mug. It was fixed in the GBA version. This glitch works as follows:

After the battle, when the player checks the inventory, if done correctly there should be a 55 next to the name of the weapon that was just stolen. As long as this is never moved from the first slot (via manually or through Sort), or no extras are bought, the player can keep selling that weapon infinitely. However, the player can only sell one at a time, and doing this trick with items will force the infinite item to never be usable outside of battle unless sorted.

To get this to work for non-throwable items, such as armor or shields, the player must perform the above steps until the first time that the Ninja or character with Throw is supposed to throw the blank slot and have them throw that slot twice before moving on. This will result in getting only 99 of said stolen item however.

The Anthology remake only allows for 255 of one item. As a seemingly sloppy fix to this bug, the item count always goes down selling each item, even though one owns 255 allowing the player to sell 255 of an item making plenty of gil.