Marina Inoue
Ines Belfarre, commonly referred to as Captain Ines (イネス大尉, Inesu Tai'i?), is a non-player character in Final Fantasy Type-0. She is a technician at the Steelworks and pilots the magitek armor Vajra.

Ines is a 22 year old blonde-haired woman who wears glasses. She is seen in the manga wearing a lab coat over a shirt and skirt. She is also shown in a military uniform while on the field.

Ines is a talented scientist confident in her abilities. While shown in the manga to display a subpar degree of formality toward her superior, Qator Bashtar, she has profound admiration for and devotion to Qun'mi Tru'e. She is emotionally volatile, and displays bloodthirsty rage toward Class Zero.

Ines speaking to Qun'mi for the final time

Following Qun'mi's failure to capture Akademeia, it is decided that she will drop the Ultima Bomb on the Lorican Alliance, sacrificing herself in the process. Though knowledge of the defeat is supposed to be limited to those of high rank, Ines has become aware of the situation and questions Qun'mi as to why she alone is bearing the consequences. Qun'mi claims the decision was hers, and implies Ines would take her place. Ines begins to cry, and Qun'mi attempts to console her by telling her that her memory will be erased. Ines was indeed selected to succeed Qun'mi as captain due to her talent despite her youth and tendency to act emotional. Reassured by the idea that her sacrifice would not be in vain so long as someone continues her work, Qun'mi rests her hand on Ines' shoulder, then leaves her to weep.

Due to being a l'Cie of the White Tiger Crystal, Qun'mi survives the bombing of Lorica but becomes fused to the terrain. Captain Ines, having concluded that Qun'mi has entered crystal stasis as she never returned, seeks vengeance on Class Zero for causing the original mission to take over Akademeia to fail. She sets a trap for the cadets and battles them using Vajra during their escape from Ingram.

Ines deduces that Class Zero can be revived, which further upsets her. She wipes out the majority of the class, but is killed by Jack, who dies shortly afterward, leaving Deuce as the only one left standing. An audio recording of Ines' discovery is sent to Qator, and thus the intel is preserved.

I must exact Lady Qun'mi's revenge!

Captain Ines is encountered during the Escaping the Imperial Capital mission, and is determined to kill Class Zero. Like in the previous cycle, she aggressively seeks vengeance for Qun'mi. After her defeat, she is implied to be dead, as Vajra is severely damaged and burning. However, no phantoma is harvested.

In the scenario depicted by the manga, Ines is informed by Colonel Faith that Class Zero is responsible for the loss of Qun'mi. She snaps and goes on a similar rampage as in the game and novel.

Vajra, piloted by Ines, is the final boss of the Chapter 4 mission Escaping the Imperial Capital.

Ines is voiced by Marina Inoue. She shares her Japanese voice actress with Caetuna. 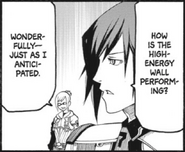