Indrajit (インドラジット, Indorajitto?) is a recurring weapon in the Final Fantasy series, appearing first as one of Serah Farron's bowswords. Outside of Final Fantasy XIII-2, it usually appears as a sword.

Indrajit raises Strength by 64 points, Magic by 80 points, and has innate ATB Rate: +50%. Its synthesis ability is Buff Duration. It is dropped by Immortal.

Serah, who appears as a downloadable character for the iOS port, wields Indrajit in its sword form as her weapon of choice.

Serah wields Indrajit in its sword form as her weapon of choice.

Indrajit is an R rarity sword with 780 Attack, 820 Defense, and Normal growth. 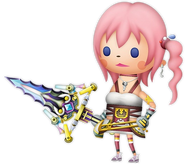 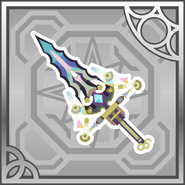 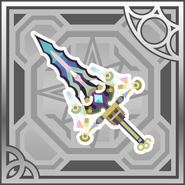 [view · edit · purge]Indrajit (Sanskrit: इंद्रजीत) is mentioned in the Indian epic Ramayana as the son of King Ravana. He is blessed with great strength is the only warrior to have ever possessed all three ultimate weapons of Trimurti.