Imperio, right hand man of the Emperor, serves as the unofficial leader of the other three divine generals. In comparison with the violent Shango and the icy Cocytus, he is dignified and refined, with a slight smile always gracing his lips.

Imperio is one of the Divine Generals in Final Fantasy Dimensions.

As the Warriors of Light and Darkness approach the entrance Castle Avalon, an unfamiliar voice calls out to them from within the castle walls. The voice belongs to Imperio, who welcomes the party to the castle, and declares they are to be treated as 'guests of honor' by the Emperor. Further inside, Vata warns the party that the four Divine Generals are present and mentions Imperio by name. He also speaks of Gehenna, general of Darkness, whom he claims has been seen by no man.

After the defeat of Cocytus and Shango, the party ventures forth to the throne room, where Imperio stands to the right of the Emperor's throne. The General congratulates the heroes on their bravery, and thanks them for showing the Empire the extent of power contained within the crystals. Imperio demands the crystals be handed to the Emperor, as he claims the original purpose of the warriors was to find each of the crystals and deliver them to the Empire. After they refuse, Imperio attacks them. Halfway through the battle, he changes into Gehenna of the Darkness, his alter ego, but still fails to take the crystals and is destroyed. 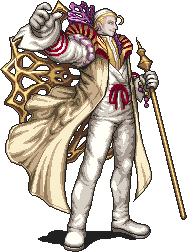 Light Avatar is a light-type enemy created in Imperio's image.

Imperio appears on a card.