The Imperial Palace is located in the city of Vector, and it is where Gestahl reigns over the empire in Final Fantasy VI. The player first sees Vector in a flashback at the beginning of the game. The player can enter the Imperial Palace's outer region during their first visit to Vector after Setzer Gabbiani joins the party and provides his airship, but they are attacked by the Guardian and are forced to flee when they are unable to defeat it.

Kefka placed a Slave Crown on Terra in the palace's highest chamber. Later, Gestahl gave a speech to his troops on the top floor.

After the Returners open the Sealed Gate, the espers emerging from within raze the imperial capital. The Returners enter the palace to discuss the current state of affairs over a banquet. Gestahl appears to have surrendered and asks the Returners' help in negotiating peace with the espers, and supplies a Magitek Armor Transport Ship. Terra and Locke heads on a goodwill mission to Crescent Island under the command of General General Leo to find them. Kefka Palazzo is locked within a dungeon in the palace at this time. After Leo and the others find the espers Gestahl frees Kefka and sends him to obtain more magicite from dead esper remains, while he himself abandons the palace to venture to the Esper World and find the Warring Triad.

After the cataclysm, the palace, along with the rest of Vector, is integrated into Kefka's Tower. Various chambers in the tower still boast imperial banners from the palace. The palace's prison remains intact and contains the boss Ultima Buster.

The exterior of the imperial palace is much like the rest of Vector, highly industrialized and more like a factory than a palace. The palace has a pyramid shape to its architecture, consisting of large metal plates held in place by girders. The exterior contains a large machine, the Guardian, that protects it from intruders.

The interior of the palace is sparsely furnished with red carpeting and Imperial banners, but maintains the industrialized aesthetic of the exterior. The palace opens on a hallway up several flights of stairs to Emperor Gestahl's throne room, and beyond this lays a banquet hall. Branching off from this hallway, the east wing of the palace contains prison cells and a private bedroom and study, and the west wing contains a small treasure room and a soldier's barracks.

Both wings have stairs to the roof of the palace where Gestahl gives a speech at the start of the game. The exact purpose of the small room at the palace's pinnacle of unclear - Kefka holds Terra here while putting the Slave Crown on her in a flashback, and it is also where he activates cranes to attack the party. The skyline of the palace overlooks the rest of Vector, a dreary polluted landscape.

The small treasure room in the west wing of the palace contains an X-Potion and an Alarm Earring, and the soldiers' barracks nearby has an Ether. In the east wing, the bedroom contains a Gale Hairpin and the connected bathroom has a Holy Water.

Depending on the player's performance during the banquet, they can receive a Ward Bangle and a Tintinnabulum as rewards afterward.

When the party arrives at the Imperial Palace after the Blackjack, an escort takes them to Emperor Gestahl and he announces a banquet. Cid asks the party to speak to the soldiers around the palace, as some of them still wish to carry on the war. The party has four minutes to talk to as many soldiers as they can, some of which initiate battles. Depending on how many soldiers the party speaks to, combined with how they answer Gestahl's questions at the banquet, the party will receive rewards afterward.

There are twenty-four soldiers to speak to. The two Elite Soldiers in Gestahl's throne room and Kefka in his prison cell do not count, and Kefka wastes a substantial amount of time so it is advised not to speak to him. Speaking to a soldier earns one point, defeating a soldier who attacks earns five points. The locations of the soldiers are as follows:

During the dinner with Gestahl, he asks various questions, and the player's answers reward them with additional points. The amount of points earned for each response is noted in brackets after the answer.

Gestahl asks what to do with Kefka

Gestahl apologizes for the poisoning of Doma

Gestahl wishes to know if the party has any questions. All responses count for +2 points the first time they are asked, but the player loses points for asking the same question again. It is also important the player remember which question they asked first.

Gestahl says the espers will tear the world apart

Gestahl asks which of the three questions the player asked first. A correct answer earns +5 points.

Cid offers a break. Should the player accept, they can speak to the soldiers at the table to battle them as three Imperial Elites. Defeating them within the time limit earns +5 points. Returning to the center chair at the bottom of the table will begin the dinner again. Fighting them is necessary to earn the maximum score, so it is advised to do so.

Gestahl asks the player to accompany the Empire to search for the espers. Answering yes the first time he asks earns +3 points. The player must answer yes to proceed with the game, but refusing the first time they are asked will not earn them any points once they accept.

Assuming the player speaks to all the soldiers and answers of all Gestahl's questions properly, they can earn up to 93 points. After the banquet, they are rewarded based on how many points they earned. The rewards, which are cumulative, are as follows: 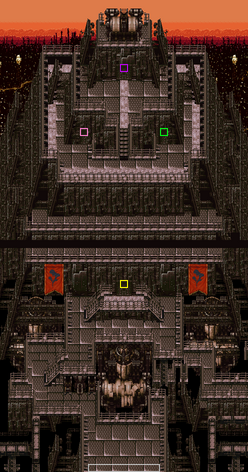 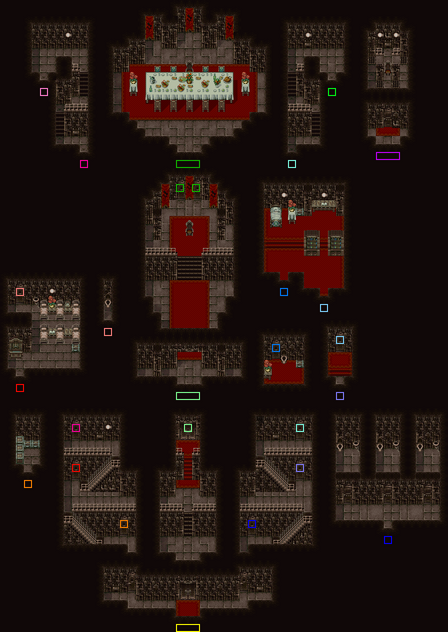 "The Gestahl Empire" plays in the Imperial Palace while "The Returners" plays during the banquet. 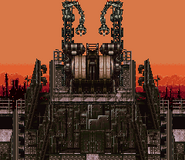 The two cranes above the Imperial Palace.