The Imperial Observation Post is a location in Final Fantasy VI. It was set up in order to defend the Cave to the Sealed Gate so only the Empire had access to espers. It also allowed them greater ease of entering the cave. If the party goes to the observation post before speaking to Banon and Arvis in Narshe after Terra Branford's flashback, it will be full of Imperial troops who will attack the party and throw them out of the base.

When the Returners decide to enlist the aid of the espers to battle the Empire, they ask Terra to try and call for their help through the Sealed Gate. When the party arrives at the outpost to try and sneak through to the gate, they find it mysteriously abandoned. The party continues through to the cave to the gate.

After the banquet with Emperor Gestahl in the Imperial Palace, depending on the party's behavior during the banquet, the Empire authorizes them to take anything they want from the outpost's storehouse.

The base is apparently destroyed in the World of Ruin.

The storehouse of the outpost is locked, but if the party performs well enough during the Imperial banquet it will be unlocked afterward. As the outpost is gone in the World of Ruin, the player must remember to get these items before completing the Floating Continent. They can be acquired either immediately after the banquet by walking to the base, or later after the events of Thamasa when the Blackjack is repaired.

Additionally, there is a hidden chest in the lower-right corner of the room that contains another Elixir, and the stove contains a Flametongue. 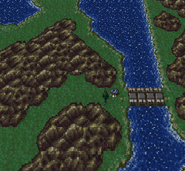 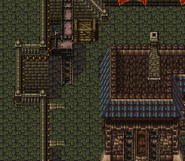