Skies
The Imperial Air Force, also called Imperial Airforce or IAF for short, is a faction of the Gestahlian Empire in Final Fantasy VI. Composed of several air machines, the Air Force is seen during the Battle over the Floating Continent. The Air Force consists of several Sky Armor and Spitfire, and is commanded by the command ship Air Force.

After the Returners land on the Floating Continent, Air Force is destroyed, along with the majority of the other ships in the fleet, and they are not mentioned again. Palette swaps called Death Machines appear in Kefka's Tower, one of several apparent former Magitek machines that prowl the tower's factory areas.

In the Anthology release, the machines of the Air Force can be seen patrolling Vector and attacking the Blackjack in FMV sequences.

Some of the Imperial Airforce aircraft appear as enemies.

The Air Force attacking the Blackjack in Anthologies.

The Air Force vehicles out of battle. 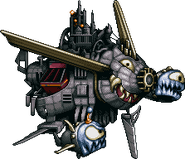