The Impartisan (さごじょうのやり, Sagojō no Yari?, lit. Spear of Sagojo), also called Imp Halberd, is a recurring weapon from the Final Fantasy series. The weapon is usually related to Imps (Kappa in the Japanese version).

Impartisan (Imp Halberd in the older translations) has an attack power of 253, but the power of the spear is "activated" when equipped on a character under the imp status. When equipped on a human, the Impartisan only has an attack power of 1 and unarmed is 10. Since the Impartisan is a spear weapon, it gets the attack bonus from Jump. It enables Runic and is Two-handed compatible, the spear can also be equipped by everyone except Umaro. This weapon is ignored by the Optimize option in the equipment menu.

It can drop from Tyrannosaur, be stolen from Greater Mantis, morphed from Cactuar, Tonberry, and Tonberries, and won by betting the Cat-Ear Hood in the Coliseum.

This section about equipment in Dissidia Final Fantasy is empty or needs to be expanded. You can help the Final Fantasy Wiki by expanding it.

This section about equipment in Dissidia 012 Final Fantasy is empty or needs to be expanded. You can help the Final Fantasy Wiki by expanding it.

It takes an imp to coax this spear to its full poten—ew! Why is it all slimy?

Impartisan grants +3 to Attack. It can be equipped by Dragoon, Kain, and Imp. The Imp also wields the Impartisan in battle when attacking.

A spear from a faraway world. Known to display its full potential only when its wielder is afflicted with a peculiar status ailment which turns them into an imp, there are many who recognize it as being in the highest echelon of weapons. In its world of origin, a moogle warrior skilled in dancing is said to have wielded this spear.

Impartisan (FFVI) is a Spear obtained as the Trust Master reward from Moogle of Narshe Mog. It provides 170 ATK, 50% bonus damage against bird and stone enemies, has a damage range of 100-160%, +50% Accuracy, and is two-handed. 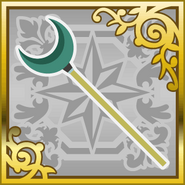 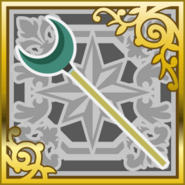 Impartisan is a portmanteau of "imp" and "partisan." [view · edit · purge]An imp is "a small, mischievous devil or sprite".

[view · edit · purge]A partisan is a type of polearm that was used in Europe during the Middle Ages. It consisted of a spearhead mounted on a long shaft (usually made of wood) with protrusions on the sides which aided the user in parrying sword thrusts.

In the Japanese version, the Impartisan is called Spear of Sagojo. [view · edit · purge]Shā Wùjìng is one of the three disciples of Xuánzàng in the classic Chinese novel Journey to the West. His name is translated into Japanese as Sha Gojō (sometimes Sha Gojyō, as jō is spelled in kana as ji-yo-u, or Sagojou in Romaji.