Prevents you from using special skills and magic.

Imp (カッパー, Kappā?) is a status ailment which transforms the afflicted into an imp, a green reptilian-skinned creature with a pointy nose. It originates from Final Fantasy VI.

The Imp status reduces the Attack to zero, makes their base Strength used to determine attack damage, and their Defense is determined by the character's base (Except when using the Imp equipment). The only battle commands usable while a character is under the imp status are as follows: Attack, Items, Magic, Revert, Mimic, Row, Defend, Jump, Dualcast, Pray, and Shock.

Although imp status is normally a negative effect, it does allow the use of Imp equipment, which is very powerful, although its numerical advantages must be evaluated against losing almost all of the character's special abilities.

Unlike the previous installment that features transformation spells such as Toad and Mini, a character under the imp status does not change said character's sprite outside of battle. The afflicted character retains their normal form on the field or overworld map. The imp has a full spritesheet, including a chocobo/Magitek riding sprite that cannot be seen. The majority of the guest characters do not have a riding sprite.

The imp status effect appears in the fight against Ultros and Typhon at Dragon's Neck Coliseum, inflicted on players by the Imp Song attack. Afflicted players can only use Imp Punch until it wears off. During the fight, imps can absorb Ultros' bubbles to power up their "Imp Punch," which is essential to stop Typhon from sneezing everyone out of the ring.

In addition, players can obtain a Water Imp minion from the Manderville Gold Saucer for 10,000 MGP.

The Imp status card will cancel the effects of all the selected job cards on the Duel Colosseum. This can be overrun by the Chemist job card.

The Imp status card appears in the new Labyrinth mode, and nullifies any active job cards.

Imp is an ailment that can be inflicted by Kefka Palazzo's Heartless Angel EX skill. It decreases the inflicted's attack and defense for 20 seconds.

Final Fantasy: All the Bravest[]

An Imp is one of the of the Premium Character Shop random purchases, performing Whirlpool Strike as his attack. 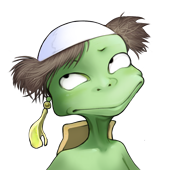 [view · edit · purge]In the Japanese version of Final Fantasy VI, the Green Cherry is called the Yellow Cherry. Together with the Imp status, known as Kappa in the Japanese version, the two are a reference to the Kizakura sake brand, which prominently uses a kappa as its mascot and often features it in marketing alongside yellow cherry blossoms; kizakura means "yellow cherry".