Immunity abilities are support abilities that appear throughout the Final Fantasy series. Most of the time they are nameless, providing immunity to elements and status ailments. They are almost always provided by equipment, having no recurring terminology.

The customization system in Final Fantasy X provided a name for these support abilities: the "-proof" suffix. Elemental immunity is not present in early installments, with only elemental resistance being present.

This information is commonly provided in-game by item descriptions.

Several high-ranking armor pieces provide status immunity, but no elemental immunity or absorption. The Genji and Crystal equipment sets are the main ones with these effects.

The Onion Helm, Onion Gauntlets and Ribbon protect against all status ailments.

Resistance to status and elements is granted by armor.

The Ruby Ring prevents Pig; the Rune Armlet protects against Silence and the Crystal Ring grants the wearer protection against Paralysis, Sleep and Confusion. The Crystal Mail protects the wearer from Darkness, Silence, Mini, Toad, Pig, and Berserk, and the famed Adamant Armor grants immunity to all statuses but Doom, HP Critical, Berserk, Slow, and Sap.

The Giant's Gloves grant immunity to Mini; the Headband defends against Confusion; the Black Cowl protects the wearer from Sleep; the Coronet can protect from Toad, Mini, and Pig, and the Funny Mask prevents Paralysis.

Elemental immunity properties for equipment debuted in Final Fantasy V, with its accessories.

Immunity was known as No Effect in the SNES/PSX version, and Negates in the Advance version in the armor/relic status window when the player double clicked on an armor or relic.

The Flame, Ice, and Thunder Shields nullify ice, fire, and wind, respectively; the Paladi'sn Shield protects the wearer from poison, earth, wind, and water; the Red Jacket nulls fire; the Minerva Bustier protects the wearer from fire, ice, lightning, and wind, and the Tabby, Chocobo and Moogle suits nullify poison. The Berserker Ring nullifies lightning while the Blizzard Orb nullifies fire; these two relics can only be equipped on Umaro.

The Amulet grants immunity to Poison, Blind and the dreadful Zombie; the Fairy Ring protects against Poison and Blind; the Jeweled Ring grants protection against Petrify; the Memento Ring protects from Zombie, Petrify and Death; the Peace Ring shield the user from Confusion and Berserk; the Safety Bit protects from Instant Death; the Ribbon returns as a protection from all status ailments; the Silver Spectacles grant immunity to Blind; the Star Pendant grants protection from Poison and the White Cape grants the wearer immunity from Silence.

Due to the immunity bug, the Cursed Shield can be used to gain immunity from negative statuses if equipped mid-battle.

Curiously, the Elemental Materia can also be linked with a non-elemental Materia for the Hidden effect. For status immunity, the wearer gains immunity to all statuses the linked Materia can inflict, whether or not the Materia has actually learned the respective spells yet; linking Added Effect with Transform gives immunity to both Mini and Toad, even if the Materia hasn't learned Toad yet.

Immunity to status and elements is obtained via the Junction system. Guardian Forces learn the Elem-Def and ST-Def abilities either naturally or via the Elem Guard and Status Guard items, and then stocked magic can be junctioned via these abilities to grant immunity to the elemental and status properties the spells possess. Most effects are straightforward, e.g. Fire spells having the Fire element for junctioning, but some magic spells are special, such as Ultima, that has all elemental properties.

Elemental proof abilities are upgraded forms of the abilities with the "Ward" suffix, stopping their respective element from inflicting damage to the wearer, instead of the 50% semi-resistance offered by the "Ward" abilities. They are still a step down from the abilities with the "Eater" suffix, which absorb their respective elements damage. The elemental proof abilities are spiritual upgrades of the elemental SOS Abilities, which function the same, but require the player to be in the HP Critical status for the effect to activate.

The NulBlaze, NulTide, NulShock, and NulFrost abilities make the party immune to Fire, Water, Thunder, and Ice elements respectively, but they wear off when the character is hit with the corresponding element.

Status proof abilities are upgraded forms of the abilities with the "Ward" suffix, with the exception of Curseproof, and reduce the chance of a status being inflicted to 0. However, there are some abilities that inflict statuses which ignore immunities.

Ribbon appears exclusively in the International/PAL/HD versions as an auto-ability. It combines the other status "Proof" abilities into one slot, with the exception of Deathproof and Curseproof, and also adds immunity to Doom. It can be customized to an armor with Dark Matter x99. It leaves the user vulnerable to Power Break, Magic Break, Armor Break, Mental Break, Delay, and Eject, and can be ignored by attacks which penetrate armor immunities.

Aeons also have an immunity ability called "—". This ability has the protections that the Ribbon ability would grant plus it protects the wearer from all four Breaks and Death. However, this protection can be bypassed by attacks that ignore immunities.

Various elemental and status Proof abilities appear, this time accessed via either accessories or Garment Grids' effects. Some creatures obtained from the Creature Creator may have the inherent auto-ability Ailment Def., which grants immunity to all status ailments.

Immunity against status effects is achieved by equipping accessories.

There is a Resist ability for each character (except for Ba'Gamnan).

The following is a list of Resist abilities and who has them:

They go by the name "Negates" for the elements and "Immune" for the statuses. These can be viewed by checking the armor or accessory from the items menu. There are numerous accessories and pieces of equipment that provide various elemental and/or status immunities.

Fireproof is a battle ability which reduces fire-affinity damage by 50%. It has a Risk of 4.

Immunities against harmful status effects can be acquired from a few armor pieces, or from an ally who transformed into a monster which provides immunity to specific negative status ailment when equipped.

Immunities against negative status ailments can be acquired from a few armor pieces which provides immunity to specific negative status ailment when equipped. Mutants can randomly learn them through battling after winning a battle. Some monsters have innate immunity against ailments―when the party's monster transforms into certain monsters, they will gain that immunity until they transform into another monster. Robots and all robot-type enemies all have the

Pa/Po permanently equipped on them, although this immunity is a robot-only ability. 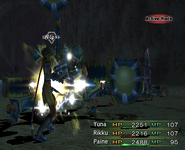