Time magick that creates an anomaly in space to prevent its targets from moving.

Immobilize, also known as Don't Move (ドンムブ, Don Mubu?) is a recurring ability that inflicts the Immobilize status effect. It is usually one of the few abilities available to party members that can inflict the Immobilize debuff.

Immobilize is a Time Magick spell under the Time Magick 1 License. It costs 16 MP to use, and immobilizes all enemies in range. In the Zodiac versions, it can be used by the Time Battlemage and Red Battlemage.

In the original version, it can be bought from various magick shops after escaping Barheim Passage. It costs 16 MP to cast (initially) and has a base accuracy of 50% and can be reflected.

In the Zodiac versions, it costs 500 gil and can be bought from many magick shops after escaping Barheim Passage, and also obtained from Trial Mode Stage 11 treasure (with Diamond Armlet). Its base MP cost is 14 and its base accuracy is 60%.

Land of all lives, suppress all rebels! Don't Move!

The Time Magick Immobilize inflicts the status effect upon unis in a cross-shaped area with a range of 3. It costs 10 MP to use and requires 100 JP to master. 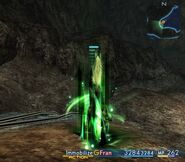