The Illusionist (幻術士, Genjutsushi?), also known as Evoker and Conjurer, is a recurring magic-oriented job in Final Fantasy series.

The Evoker is a job class gained from the Water Crystal. Evokers can summon powerful beings into battle. Each possesses a direct attack (Black) and an indirect effect (White), triggered randomly at the time of summoning. It is a weaker version of the Summoner.

The Conjurer is a Disciple of Magic class focused on healing magic and regenerative abilities. At level 30, the Conjurer can be upgraded to the White Mage job using the White Mage Soul Crystal obtained from the quest "Seer Folly".

Illusionist is a job class for humes and nu mou.

Illusionists use the power of the elements to deal a decent amount of damage to all enemies on the battle field. Because their abilities "Target All" enemies, the Illusionist can stay out of the fray and cast magic. Since they have mediocre HP growth (and outstanding MP and Magic Power growth), it is advisable to move out of harm's way at every turn.

Illusionist is a job that uses magick to attack all enemies at once and is available to humes and nu mou. They have great MP, Magick Defense and Magick growth, which compensates for low HP, Evade, Speed and Defense stats. Illusionists are best kept away from enemy attack, since their low HP puts them in danger of being KO'd—this is actually convenient, as their Magick doesn't require them to be near the targets.

The Conjurer is a job obtained by defeating Sage Yulyana, the creator of the Asterisks, at Yulyana Woods Needleworks, at the end of a sub-scenario that takes place in Chapter 6.

Illusionist appears as a job.

Female Illusionist.
Add a photo to this gallery

Knights of the Crystals[edit | edit source]

The Conjurer appears on a bronze card.

Conjurer (female).
Add a photo to this gallery 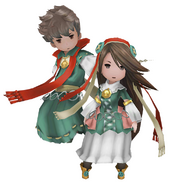 Tiz and Agnès as Conjurers in Bravely Default.

Evoker sprites from Final Fantasy Record Keeper.
Add a photo to this gallery

The job has been known as "Evoker." [view · edit · purge]Evocation is the act of calling upon or summoning a spirit, demon, god or other supernatural agent, in the Western mystery tradition. Comparable practices exist in many religions and magical traditions and may employ the use of mind-altering substances with and without uttered word formulas.

This section about a job class is empty or needs to be expanded. You can help the Final Fantasy Wiki by expanding it.
Job classes
Retrieved from "https://finalfantasy.fandom.com/wiki/Illusionist_(job)?oldid=3372898"
Community content is available under CC-BY-SA unless otherwise noted.