The Iifa Tree, called Iifa, the Ancient Tree of Life in the location logo, and sometimes mistaken as the Lifa Tree, is a location on the world of Gaia in Final Fantasy IX. It was planted long ago by Garland as a gigantic soul filter, filtering the souls of Gaia. It is located on the Outer Continent.

The dwarves of Conde Petie refer to the Iifa Tree as the Sanctuary, because after going through a ceremony, not unlike getting married, the happy couple journey to the Iifa Tree to inscribe their names.

The Iifa Tree originates from Terra and is over 5,000 years old. It was transplanted to Gaia by Garland after the Terrans' failed attempt at fusing the two planets into one. As a result of the failed fusion, Gaia's landscape was left in ruin, and to oversee the world's recovery Garland moved Terra's magical tree, Iifa, to Gaia. Even though Garland used the Iifa Tree's roots to stabilize the environment it took millennia for the planet to recover from the disaster.

Around 3,000 years ago Garland used the Iifa Tree to block Gaian souls from returning to their crystal in the planet's core, halting the planet's soul cycle. Garland's plan was to only allow Terra's souls to cycle. Around 1,800 years ago Garland built the Soul Divider at the tree's base to replace the rejected Gaian souls with Terran ones so the Terran civilization might one day be revived. The Mist that covers the Mist Continent is a by-product of the filtering process, and is expelled from the tree to the Mist Continent through the tree roots. The roots can be seen breaking the surface on the world map on the Mist Continent, hinting at the tree's existence before any mention of it occurs, but its malign purpose is not obvious.

Zidane and his friends are lead to the Iifa Tree by Eiko to find Kuja. Eiko dispels the barrier surrounding the tree created by Carbuncle, and the group enters the trunk through a maze of roots. They find a platform which reacts to Zidane's presence, allowing for descent into Iifa's depths where the Mist breeds powerful monsters, and the interior glows a blinding green. After riding a leaf-like protrusion farther down the tree, Zidane, Garnet, Vivi, and Eiko marvel at the seemingly endless green pools below the harp-like structure of Iifa's base.

After Zidane examines the area the Iifa Tree begins to shake, and Soulcage, the Soul Divider, challenges the party. Soulcage's demise eradicates Mist from the Mist Continent but the tree still blocks the Gaian souls from returning to their crystal. Shortly after, the area surrounding the Iifa Tree is the stage of a battle between Alexandria's army and Kuja, who takes control of Bahamut and the Alexandrian forces are destroyed.

After Kuja destroys Terra, a dying planet that has existed on the inside of Gaia ever since the failed fusion, the Iifa Tree activates and expels enormous amounts of Mist across Gaia. Its roots protrude everywhere, cutting off several locations such as the North and South Gates, the already inaccessible Evil Forest, Observatory Mountain, Ice Cavern, Pinnacle Rocks, Fossil Roo, Conde Petie, Conde Petie Mountain Path, the Desert Palace, Oeilvert, and Esto Gaza. The portal to Memoria manifests above the Iifa Tree and the Second Battle of the Iifa Tree ensues with a swarm of Silver Dragons when the Invincible attempts to enter the portal, and the party fights a Nova Dragon.

The Iifa Tree lies on the northwestern side of the Outer Continent. Its roots spread out across the surrounding land with a sparse forests nearby.

The entrance to the Iifa Tree is barred by a seal. Eiko explains an eidolon is sealed there and that only a summoner can clear the way. Gargant Grass grows around this area, prompting Zidane to wonder if a gargant lives nearby.

When the player is first here, they must select "Ask Eiko" to continue. The Ruby jewel is obtained at this point.

When the party returns after recruiting Amarant at Madain Sari the Mist is gone. A scene plays out with Kuja, and the player must choose their party.

The dense, twisting roots of the tree provide a path for Zidane and the party to travel across to reach the trunk. The area is infested with monsters.

The first four screens of Tree Roots take place in the same field area, pictured right. On each screen the player will start at the bottom and move to the top before appearing on another branch at the bottom again. Only one branch appears on the screen at a time. The screens are linear paths from a top-down perspective.

When the player ventures here after obtaining Amarant, the fourth screen will instead take the player to the Tree Trunk.

The third area of tree roots is another straight path closer to the base of the tree. Mocchi, a moogle, stands at the bottom of the screen.

The bottom of the screen links to the second area of tree roots, and the top of the screen contains a descending platform that responds only to Zidane. This takes the player into an Inner Roots area.

The first time the player goes onto the elevator a short scene occurs where the party discovers what the platform does.

As part of the Mognet sidequest, the player can deliver a letter from Mogryo to Mocchi.

Mist and roots permeate even the inside of the tree. Blue treasure chests not usually seen in Gaia are scattered throughout.

The elevator in the bottom right can take the player back to the tree roots. The exit at the top-right screen takes the player down into the second area of the inner roots.

This area has a number of offshoots from the path on the left. The second encountered from the top has an action related where the character can push something. Pushing it drops a chest containing a Phoenix Down onto the first offshoot from the path. Another offshoot from the path at the bottom-most point in the screen is a chest containing a Hi-Potion. On the path before the chests for the other items will be a Healing Rod, however it only appears once the player presses a switch in the third inner roots area.

The lower depths of the Iifa Tree glow a bright green. A leaf-like elevator platform that again only responds to Zidane takes the party on a spiraling descent.

On the way down, a scene with two fixed encounters ensue, before the party reaches the bottom of the tree.

The green light grows brighter at the bottom, which appears to have a structure similar to a harp. The light is so bright the bottom cannot be seen; only swirling green pools are visible. Soulcage ambushes the party here and is defeated, ending the expulsion of Mist.

The player progresses with the story when they press the action button on the farthest left point of the lower level. Talking to Dagger will trigger the scene onto a boss fight against Soulcage. After the battle a scene ensues and the player will find themselves back at the Outer Seal.

Atop the screen is a fairly hidden Mocchi. The bottom of the screen leads onto the Tree Path.

A scene will ensue when the player first comes here, and the player will encounter a pair of Mistodon enemies, shortly followed by an an encounter with a single Mistodon.

Talking to Mocchi here involves a small part of the Mognet sidequest where Mocchi will let the player read a letter from Stiltzkin to Mocchi.

The Tree Path is a long path where the player is chased by Mistodon enemies as fixed encounters.

Template:See Also The Iifa Tree's moogle appears in the third tree roots section and in the Tree Trunk. If the player earlier received the Vivi's Eyes letter, they can give it to Mocchi. Finding Mocchi at the Tree Trunk will allow the player to read the Blessing or Curse? letter from Stiltzkin to Mocchi.

All enemies inside Iifa Tree can be one-hit killed: Zombies, Dracozombies, Mistodons and the boss Soulcage are undead, therefore healing spells and items can easily dispatch them; Stropers are Stone enemies can be killed by using a Soft on them. Myconids, being Level 20 and thus a multiple of 5, are vulnerable to Lv5 Death, assuming that Quina has learned the Blue Magic spell from either the Stroper or the Dracozombie.

The Iifa Tree was designed by concept artist Christian Lorenz Scheurer, who "wanted to give the tree a brain-like appearance".[2]

When the player returns here for Kuja, "Dark Messenger" plays. "City Under Siege" plays once the party talk to Kuja and onwards.

The Iifa Tree appears in the background of the Field Music Sequence for "Over the Hill" and "Dark City Treno". 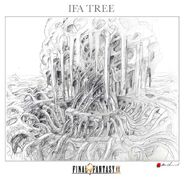 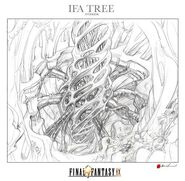 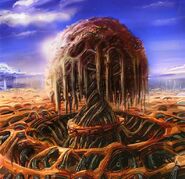 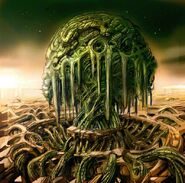 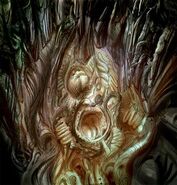 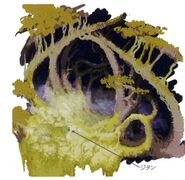 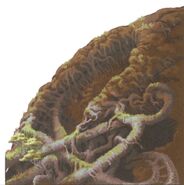 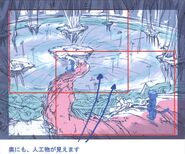 Concept artwork of the Iifa Tree binding Gaia's crystal.
Add a photo to this gallery

Outer Seal with no mist. 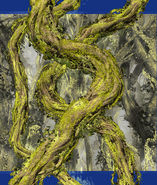 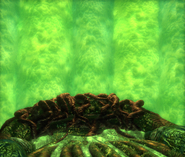 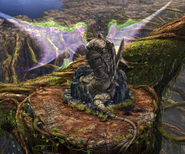 Battle outside the Iifa Tree.

The Japanese dungeon image for Iifa Tree in Final Fantasy Record Keeper.
Add a photo to this gallery

[view · edit · purge]Iifa is pronounced the same as Aoife, an Irish word which means "beauty", but as a name, it is used more symbolically as an adaptation of the Latin Eva, which comes from Biblical Hebrew חוה Ḥawwā and means "living". (The common English form of this name is Eve.) Emphasizing the tree's association with life, the circle-and-cross pattern on the front of the tree resembles the Ankh, an Ancient Egyptian symbol for life.

The "world tree" is a motif in several religions and mythologies, represented as a colossal tree which supports the heavens, the world, and, through its roots, the underworld. This is similar to how the Iifa Tree connects Terra to Gaia and the "afterlife" it governs via the soul cycle, and how the Iifa roots encircle the planet in their grasp.

The tree is also connected to the motif of the tree of life, a mystical concept alluding to the interconnection of all life on the planet.