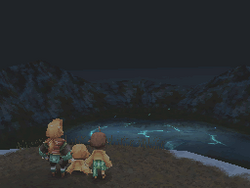 Ignes Fatui are the manifestations of the souls of the dead in Final Fantasy Crystal Chronicles: Ring of Fates. They appear next to Yuri and Chelinka's home, over Lake Cyela.

[view · edit · purge]The Ignes Fatui, "Fires of Fools" in Latin, are a chemical phenomenon in real life. The oxidation of characteristic chemical compounds commonly found in bogs and swamps, produced by the decay of organic matter, cause glowing lights to appear in the air. These lights are commonly referred to as will-o'-the-wisps. The singular is ignis fatuus.

The phenomenon of Ignes Fatui in Final Fantasy Crystal Chronicles: Ring of Fates refers to Hitodama. [view · edit · purge]Hitodama (人魂?) ("human soul") are believed in Japanese folklore to be the souls of the newly dead taking form of mysterious fiery apparitions. The word is a combination of the Japanese words hito, meaning "human", and tama (short for tamashii), meaning "soul". The flames appear as glowing spheres with tails and are said to be found near graveyards and in gloomy forests, and, sometimes, seen close to a dying person as an apparition of the soul leaving the body before passing to the other side.