One of the Pleiad's seven. His powerful flames eradicate all foes. Famous among even the laziest of the FF faithful, since he usually shows up early in the story.

Ifrit is a character in World of Final Fantasy. He is one of a group of powerful Mirages, known as the Pleiad's Seven.

Notes: One of the Pleiad / Nether Nebula guardian / Lord of fire / Spends time at the gym? / Sometimes goofs around

A Series Regular
Ifrit has been around since the FF summoning system made its debut. Refer to them as espers, GFs, eidolons, aeons, avatars, primals, whatever you want—but if there's a supernatural superforce to call on, you can bet Ifrit is somewhere in the lineup. Along with Shiva and Ramuh, he's one of the most familiar faces in the summon community.

Extremely Dangerous?
The Grymoirian Ifrit has a reputation for being ill-tempered and violent. But contrary to public opinion, he is actually a very decent Mirage who cares deeply for the people of Grymoire. He's even taken it upon himself to make sure no one accidentally stumbles into the Nether Nebula and gets hurt. To this purpose, he takes full advantage of the rumors about him, and leaps out to frighten any who wander in.

His fondness for humans puts him at clear odds with another, less savory Mirage in his tribe...

The Nether Nebula: Part 1
Some Mirages, especially those known as "espers," have been summoned to Grymoire from their various homeworlds.

Espers cannot travel between worlds on their own and, as a rule of thumb, only appear outside their homeworlds when called there by summoners. However, there are some places, like the Nether Nebula, where the barrier between worlds is thin enough to make the crossing.

Ifrit, along with Ramuh and Shiva, appear before the twins from crystals within the Nether Nebula. After greeting the twins, much to the latter's confusion, they notice their condition and conclude that they are not the same masters they once knew and declare that if the twins wish to command them again, they would have to prove their strength. Stating that rather than having all three of them fight, the twins can select one they want to fight.

Though the twins emerge victorious, the three Mirages inform them that they still lack the power to command such powerful Mirages in battle. Instead, they leave them a prismarium with a lesser Mirage belonging to their tribe and bid their farewell.

Choose me! I know you've missed it. Step now into the searing embrace of my Hellfire!

When chosen to fight in The Nether Nebula 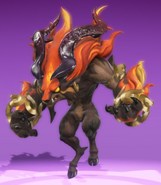 Ifrit as he appears in the Mirage Manual. 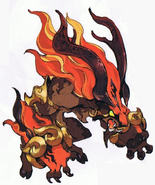