Pyreburner. That heart of flame was turned to ash once. A dead flame must burn no more. Taste again the chill wind of death.

Ifrit is fought as a boss in Final Fantasy XV during The Cure for Insomnia Main Quest. Defeating him in Normal difficulty earns the Chosen King achievement/trophy. Ifrit's model was updated in patch 1.21 in both the battle and the bestiary, as well as the bestiary background for Astrals.

The battle is reprised in Final Fantasy XV: Comrades.

In both the main game as well as Comrades, Ardyn Izunia describes Ifrit before dispatching the Infernian to deal with his opposers. In the main game, he tells Noctis and the party that he'll await them at the throne room. In Comrades, he bids the Kingsglaive to have fun and "not die this time." During the cut scenes, Ifrit destroys the cape from Noctis's Kingly Raiment attire.

God of Fire. It was the Infernian who bestowed the gift of fire upon the man in antiquity. He reigned over the ancient kingdom of Solheim until his once-loyal subjects turned against him. The Pyreburner then waged the Astral War that would quench his own life's flame until his own daemonic resurrection by means of the Starscourge.

Main Quest: The Cure for Insomnia

Out of the frying pan, dot, dot, dot?

Ifrit starts the battle sitting on his throne. If the player warp-strikes up to him, he will pick Noctis up in his hand, inspect him, and toss him away. He will sit passively while flames engulf the party, dealing damage. The summoning prompt appears, calling forth Bahamut, and the second stage of the battle begins. Bahamut is summoned even if the player doesn't follow the prompt.

In the second battle phase, Ifrit begins to walk about the battle arena. He is fire-elemental and is weak to ice. His attacks can set the party on fire. The player can't use character-swap. The lamp posts around arena can be point-warped to, as well as the Citadel building itself.

Ifrit's body and sword are engulfed in flames, which are temporarily subdued if the player freezes him with ice Elemancy or he enters Vulnerable status. He wields his flaming sword in large arcs (can be block/parried), and can disappear and reappear by turning into flames, suddenly reappearing to attack someone with his sword. When Ifrit is in the flame state, he cannot be damaged and Noctis will complain his weapon only hits air. Ifrit can eject a shockwave of fire from his body and pick a party member up in his hand, dealing continuous damage to them before tossing them away. He can throw his weapon at a further target and it will reappear into his hand. He can leap high into the air and descend upon the party by plunging his sword into the ground, dealing damage to everyone around the impact zone (can be block/parried). He can destroy some of the lamp posts around the arena.

If the player warp-strikes Ifrit and keeps air-stepping around him, he may pick Noctis up in his hand and throw him high into the air for aerial combat. Another way to initiate aerial combat is to point-warp up a couple stories high in the Citadel, and Ifrit follows. The player should have Airstep and Air Dance from the Ascension. Even in midair Ifrit fights similarly, turning into flames and swiping with his sword. He can't really fly (like Noctis in Armiger) or airstep, but stays afloat via turning into flames and then appearing above Noctis. Fighting Ifrit midair can trigger a QTE where the two exchange blows before falling to the ground. When fighting Ifrit midair, Noctis's party members are unable to attack him.

When Vulnerable, Ifrit kneels on the floor and is unable to attack for a time. Cross chain can trigger at this time.

After losing ~40% of his health, Ifrit's body darkens and the flames begin to burn more ferociously, and he becomes more aggressive. When Ifrit has ~20% of his HP left, his fire begins to burn even hotter and he starts to attack faster. When he has only little HP left, the party hears Shiva's voice, and the summon prompt for her will soon appear.

There is a scripted sequence initiated with the Attack button where the party's combined attacks with the royal arms bring Ifrit to his knees. Ignis wields the Swords of the Wanderer in their combined state, Prompto wields the Sword of the Wise, Gladiolus wields the Axe of the Conqueror and Noctis finishes the sequence with the Sword of the Father. The reason the party wields the royal arms in the sequence is likely because they are weapons that the player is sure to have in their inventory at this point. If the player gets this sequence, Ifrit still stands up at 0 HP left, and Noctis summons Shiva who shatters Ifrit with her kiss. Both Ifrit and the party need to be on the ground level for the royal arms sequence to happen. If the party members were Down, they come back to life with 1 HP to take part in the sequence. If the player wants to pull it off, they should ignore Shiva's summoning call until they can trigger it.

After the 1.06 patch, Alterna has a chance of working on Ifrit. The game was again patched in 1.08 to fix a bug concerning using Alterna on him. If the player defeats Ifrit with Alterna, the normal death animation with Shiva will trigger.

The player can wear Fire-resistant accessories to fend against Ifrit's attacks. The Thermal Suit attire makes the wearers immune to Fire and Burnt, but is only available after defeating the final boss. The King's Knight Tee attire gives +25% fire resistance. However, the player may want to wear the default Chapter 14 attire for Noctis, as what he wears appears in the cut scenes following the boss battle (see Trivia).

The player can go back in time with Umbra from a break room and eat Steamed Crab with Rock Salt at Galdin Quay restaurant, making them immune to all element damage. The player can also opt for foods that simply give HP, Strength, Defense and Critical hits as to be more useful for the boss battles following Ifrit.

Ignis's Enhancement Technique bestows Noctis's weapons with the Ice element, allowing them to deal more damage. Ice-elemental Elemancy is powerful. When fighting on the ground, attacking Ifrit's heels triggers blindside-strikes and blindside links, which can momentarily subdue him into the Vulnerable state. Blocking and parrying Ifrit's attacks can also subdue him.

There is no particular benefit in fighting Ifrit midair, apart from getting an impressive view of Insomnia and witnessing the QTE. If the player fights Ifrit midair but begins to plummet, they should warp to safety.

The battle is largely similar to the one in the main game, but the player cannot summon Astrals. As such, when Ifrit is defeated, he staggers before teleporting away in a mass of flames.

Ifrit is briefly fought in an imperial laboratory at the end of chapter 2, alongside several Royal Guards (who will fight Ifrit just as they do Ardyn). Shortly after all the Royal Guards die, Ifrit will grab Ardyn and attempt to crush him, forcing a QTE to avoid instant loss, and opening an opportunity to Daemonify Ifrit, ending the fight. 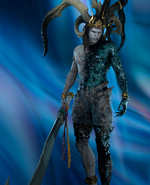 Ifrit turns into flames to teleport.