The incarnation of fire and fury, worshipped by the lizard-like Amalj'aa tribe.
Even amongst the primals, Ifrit is highly given to savagery, his temper quick to erupt in a conflagration of death. His breath ignites the very air, his claws melt the strongest steel, and his twisted horns scorch the heavens. Those who would face him must be prepared to withstand the fires of hell.

Ifrit is the primal of the Amalj'aa beast-tribes in Final Fantasy XIV, also known as the Lord of the Inferno (焔神, Enshin?, lit. Flame God). He is encountered as a boss a number of times in both in version 1.0 and A Realm Reborn.

He is the first primal confronted in Final Fantasy XIV: A Realm Reborn, setting the stage for the adventurer to rise as a Warrior of Light.

The adventurer's first major assignment from Minfilia Warde was to investigate disappearances in Eastern Thanalan with Thancred Waters. Investigating both Camp Drybone and the clergy at the Church of Saint Adama Landama, they learned the ruffian Ungust (who was previously encountered in an altercation in Ul'dah) had been impersonating as a priest to traffic refugees to the Amalj'aa to be tempered by the Lord of the Inferno. An attempt to entrap the Amalj'aa in a sting operation led to the adventurer being sold out by corrupt Brass Blades.

Forsooth, thy frail mortal frame can serve as vessel to the blessing of but One. Yet I smell not the taint of another upon thee... The truth of thine allegiance waxeth clear—thou art of the godless blessed's number. The Paragons warned of thine abhorrent kind. Thine existence is not to be suffered.

Taken to the Bowl of Embers, the Amalj'aa turned on Ungust and the corrupt soldiers by having Ifrit's flames temper them. The primal tried to claim the adventurer next, but failed due to them being "godless blessed" as the paragons had warned. A fierce confrontation ensued and the Lord of the Inferno was slain and banished to the aether, leaving behind a fire crystal.

Thancred arrived with the Immortal Flames to fend off the Amalj'aa priest and rescue the hostages. As they left, Nero tol Scaeva and Livia sas Junius were revealed to have monitored the fight from a cliff, with the former disappointed in the primal's weakness. Having bested the god of the Amalj'aa, the adventurer gained notoriety in the realm, with the Grand Companies arriving at the Waking Sands with representatives hoping to recruit the one who had slain the primal.

Garuda's forces captured Amalj'aa and kobolds in the Howling Eye to summon Ifrit and Titan under torture, seemingly with the intent of absorbing them. Gaius van Baelsar demonstrated the Ultima Weapon, which defeated the three primals and absorbed them. With the threat of the Ultima Weapon, the Amalj'aa and other beast-tribes laid low.

After the Ultima Weapon was destroyed during Operation Archon, the Amalj'aa again summoned the Lord of the Inferno, now stronger than ever. Using an Aetheryte set up in Zahar'ak, the adventurer returned to the Bowl of Embers and banished the primal once again.

Ifrit's defeat was short-lived, as the Amalj'aa resummon him using a ritual focus made from Amalj'aa bones. When the adventurer defeated this latest, most powerful incarnation of Ifrit, the Ascians appeared to tell the adventurer they had learned much from observing the battle, and to wonder aloud how long the Bringer of Light can hold back the encroaching Darkness.

When Ifrit returned, he was defeated by a new anti-primal force with Arenvald Lentinus and Fordola rem Lupis at its head supported by a group of summoners trained by Y'mhitra Rhul and Dancing Wolf.

When the party used the spaceship Ragnarok to reach Ultima Thule, the beast-tribes summoned benevolent iterations of their primals using the Mothercrystal, with Ifrit being one of the ten called forth. He gave his power to the Ragnarok, allowing it to achieve the propulsion needed for the Scions of the Seventh Dawn and the Warrior of Light among them to reach their destination.

Ifrit is fought as a boss three times at

The Bowl of Embers: first early in the main scenario, then in a Hard version in a sidequest, and finally an optional Extreme battle. While the latter two versions are fought at level 50 with a full party of eight, the initial storyline fight is at level 20, with only four players.

The Bowl of Embers (Hard) is required to restore a Relic Weapon, and the later main scenario quests starting from "Before the Fall" require it—along with

The Navel (Hard) and

The Howling Eye (Hard)—to have been previously completed at some point.

The Bowl of Embers (Extreme) is optional, and grants the achievement "Going Up in Flames".

Ifrit also appears as a mechanic in the fight against the Ultima Weapon, which uses him along with Titan and Garuda to perform combination attacks. In both fights, he is the last primal to be ejected from the Weapon.

The Summoner job can summon Ifrit-Egi as melee combat pet. It is unlocked along with the Job crystal after defeating the Egi in the quest "Austerities of Flame."

Ifrit is also one of the summons available in the magicites from the Deep Dungeon Heaven-on-High.

Through crafting, players can obtain a Wind-up Ifrit minion, which can also be used at the Lord of Verminion minigame.

Ifrit appears in the Final Fantasy XIV: A Realm Reborn Official Benchmark (Character Creation) program on PC, in which the benchmark test has a scene of him using Hellfire to annihilate a party of adventurers in Thanalan.

Square Enix's Eorzea Cafe served dishes called "Steak of Ifrit with sour spicy sauce" (with a description that translates to: We tried to grill a steak using the flames of hell, but they were much too powerful, and everything became obscured by a cloud of smoke. However, when the smoke cleared, we were greeted by something that was cooked to perfection... Please enjoy it with this tangy, spicy sauce.) and "Pizza of Ifrit with hot sauce" (with a description that translates to: A pizza loaded with salami to symbolize Flame God, Ifrit's Radiant Plume. Drizzle on our ultra spicy sauce to your liking!) 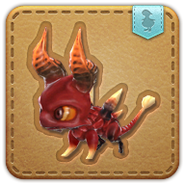 The First's version of Ifrit.

As revealed in the Tales from the Shadows side story "Ere Our Courtain Falls", Ifrit's name originated from Ifrita, a female manifestation of fire aether created by Lahabrea.