Ifrit is a boss fought in Final Fantasy X-2. He is fought in Kilika Temple during Chapter 3. He's one of the many aeons to rebel due to Shuyin's dark influence.

Meteor Strike hits one target for 500 damage, Smash is worth 200 to one target, Firaga will do 300 to all, and Hellfire will do 500 to the whole party. Ifrit does not have a set attack pattern, making him unpredictable.

With a chunk of Hi-Potions, it is not a problem to keep the party's HP up. Prior to battling Ifrit the party can equip any Fire-resistant accessories. Another method is to equip everyone with the Heart of Flame Garment Grid making them absorb Fire damage, making Ifrit heal the party, reducing the need of an active healer. The party can use Protect to ward against Ifrit's Swipe attack and Shell to ward against Meteor Strike.

A party with Dark Knights works well, possibly combined with with the White Mage/Alchemist support casting Shell and Protect (with spells or items), and use Hastega or a Chocobo Wing to hasten the Dark Knights.

Ifrit is an optional boss in the Fiend Arena and is stronger than he was during the main storyline. To unlock him, the player must capture and finish the storyline of the Flame Dragon. This will release Ifrit and he can be fought in the Battle Simulator. If all eight aeons are unlocked, the Aeon Cup is unlocked.

Flame Dragon can be captured by using a L-sized pod in Besaid in chapters 1 through 4. To complete the fiend tale, the player must raise its level by 5. 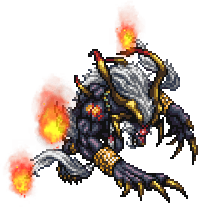 Retrieved from "https://finalfantasy.fandom.com/wiki/Ifrit_(Final_Fantasy_X-2)?oldid=3282032"
Community content is available under CC-BY-SA unless otherwise noted.